Gorgeous Literary Camp (That I Didn’t Like): A Review of Lisa Foad’s The Night is a Mouth

Posted on March 14, 2013 by CaseytheCanadianLesbrarian 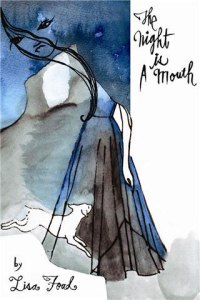 Reading queer Torontonian Lisa Foad’s 2008 debut short story collection The Night is a Mouth has been one of my strangest and most difficult reading experiences.  I started the book with high expectations: I loved the title and the evocative, haunting image it brought to mind;  I thought Foad’s poem/essay in the queer issue of Poetry is Dead (reviewed here) was gorgeous and full of dazzling imagery.  Also, I really loved the artwork (by Sonja Ahler) and the lettering on the cover (I totally judge books by their covers all the time, by the way, and I don’t see anything wrong with that).  Imagine my frustration, then, when I began reading The Night is a Mouth and I just couldn’t get into it.  I started reading it, and put it down.  Then I started it again two weeks later, from the beginning again.  I fully admit that at this point I am writing a review of this collection without having actually read it to the very end.

Bear with me while I try to explain why I had such a difficult experience connecting with this book.  What has bothered me the most, I think, is Foad’s tone.  First of all, I was confused by the tonal shifts between stories and had a lot of trouble (re)orienting myself. Questions like is this earnest? melancholy? serious? flippant? dark? light? supposed to be funny? kept running through my head; if Foad intended this effect, she did an excellent job.  Second, I felt a significant amount of discomfort at what felt like to me a dissonance between the tone and the content.  In particular, I felt uncomfortable with tones that I felt didn’t do justice to or weren’t in line with the severity of issues such as sexual abuse and exploitation.  This isn’t a judgement of Foad; in other words, I’m not saying she doesn’t understand how awful sexual abuse  is—but her writing just didn’t conform to my expectations of what taking something seriously looks like.

A lens through which to look at least some of her writing is camp (a way of thinking that does not at all come naturally to me, by the way).  The discord between tone and content I’ve been highlighting is something characteristic of camp–as far as I understand it, anyway.  Despite having taken a year-long graduate seminar on the topic I’m still pretty fuzzy on pretty much everything to do with it but establishing the slipperiness of camp may well have been the point of the class.  The story “Here There Be Monsters” is particularly campy; oddly enough, I can tell it’s supposed to be hilarious and that others would find it so, but I don’t actually find it funny at all.  So, if (literary) camp is your thing, I would definitely recommend picking up The Night is a Mouth.

In addition to being campy, The Night is a Mouth is dark, gritty, edgy and grotesque.  It’s also consistently sexually explicit.  I like all of these qualities, actually, often in combination.  For me, though, after a while these stories felt like they were being sexually daring—the themes of incest, sex work, and sexual abuse run throughout the collection—simply for the sake of being edgy and with no other intention or reason.  This just plain irritated me after a while.  Again, though, being over the top for the sake of it is another quality of camp.  Did I mention that the class on camp taught me that I don’t really like camp?

Another reason I struggled with this collection was that it is marketed as a short story collection when what it really is is poetry or prose poems.  My expectations associated with (narrative or otherwise) fiction were certainly not met by this book and I know I could have enjoyed it more had I not been frustrated and fumbling for understanding of the content. 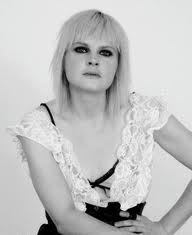 Instead, what I should have been doing was drinking in the beauty of Foad’s writing, which is the only reason I kept reading, to be honest.  Her prose is gorgeous in a way that’s simple but intoxicating.  Its repetitive, circular motions reminded me of Gertrude Stein and this is not a comparison I make lightly.  For example:

“It’s one of those nights.

The sky is a cluster of purple grapes.  Plump.  Swollen.  Cloying.

If you were to bite into a grape, you’d choke on the size of its seeds.  While you’re gagging, the seeds will find a way.  You won’t.”

“Between our legs, we hold the difference.

How did it happen?  We’re not really sure.  How did what happen?  We’re really not sure.  At first we waited.  And then we waved.  We saw them and we stopped waiting and we started waving.”

“This is called home.  Love fuck.  You say, ‘If I don’t know any better, I can’t do any better.’  I dry your eyes.  I begin to cry.  We are wet and dry.  We fuck through it.  You say that you want to protect me, me to protect you.  From wind and yourself.

Blue-white, the television glows.  Low hums that hug.  Take me with you.  We do it again.”

In short, perhaps how I really feel about this collection is quite simple and can be expressed as Alex Leslie (who graciously shared her thoughts on Foad with me) suggested: this is a great book that I didn’t enjoy.

Known in some internet circles as Casey the Canadian Lesbrarian, Casey Stepaniuk is a writer and librarian who holds an MA in English literature. She lives and works in the unceded territory of the Musqueam, Squamish and Tsleil-Waututh First Nations (Vancouver, BC). Topics and activities dear to her heart include cats, bisexuality, libraries, queer (Canadian) literature, running, and drinking tea. She runs the website Casey the Canadian Lesbrarian, where you can find reviews of LGBTQ2IA+ Canadian books, archives of the book advice column Ask Your Friendly Neighbourhood Lesbrarian, and some other queer, bookish stuff. She also writes for Autostraddle, Book Riot and Inside Vancouver. Find her on Twitter: @canlesbrarian. Some of her old reviews, especially the non-Canadian variety, can be found at the Lesbrary.
View all posts by CaseytheCanadianLesbrarian →
This entry was posted in Canadian, Fiction, Lesbian, Poetry, Queer, Sex Work, Toronto and tagged books, camp, campy, literature. Bookmark the permalink.

4 Responses to Gorgeous Literary Camp (That I Didn’t Like): A Review of Lisa Foad’s The Night is a Mouth