Reclaiming Bodies, Writing The Self: A Review of Portable Homes, Collected by Lexie Bean

Posted on March 11, 2014 by CaseytheCanadianLesbrarian

Portable Homes, collected by Lexie Bean, is quite unlike any other book I’ve read.  Like a lot of other collections showcasing the work of different writers, there were some whose writing I liked a lot, and others that didn’t really do much for me.  That’s kind of standard for anthologies; the thing is, what’s really interesting is that I’m not sure it’s really the point that some of these pieces didn’t do anything for me; the letters in this book are the kind of writing that is less for readers than it is for the writers themselves.

That’s because Portable Homes is a collection of letters by survivors of domestic abuse to different parts of their bodies.  It’s a powerful way for these people to reclaim their bodies.  You can check out this great interview on Autostraddle with editor Lexie Bean and her co-organizers Lisa Neumann and Caroline Mills, where they talk about the history of the “Attention: People With Body Parts” multi-media project. In that interview, Bean specifies that their definition of domestic violence is this: “domestic violence is violence within a place that should feel close and safe.”  She also specifies that

Within Portable Homes there were a lot of queer people, which is great. It was mostly people who identify as women, but not fully, which is really important to make space for both male and trans communities who have experienced violence, because it goes in all directions.

Another big community that’s represented in the book is low-income communities, which is people who have limited access to resources that are tangible and physical, which really makes this project feel resonant within places where that’s a big issue of accessibility because the goal is finding a safe space within our bodies and other people, and within spaces where you can’t go to a transition home.

I noticed both of these things when I was reading this book, and it was something I really appreciated.  Not only are queer women included, Portable Homes also addresses queer women as the perpetrators of violence, which is an important topic that’s not much talked about.  If you’d like to read more about this, I highly recommend Leah Horlick’s article on Autostraddle: “This Happens: Sexual Assault Between Queer Women.”  Queer men survivors are included in Portable Homes as well. 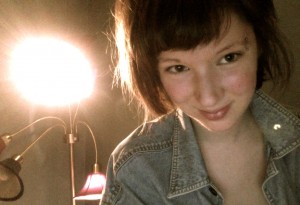 God, some of these letters are heartbreaking to read.  Some are full of self-love, but others are ambivalent about the body parts they write to.  For example, one woman wishes for bigger breasts, so she can feel more like an adult, distanced from the body she remembers that was abused.  Another woman comes up with a powerful, strange image, and says she was convinced that her belly button was a breathing hole for a future baby.  Hers was one of my favourite letters.  Here it is in full:

At seven years old, I was convinced that you were the breathing hole for my future baby. I was too afraid to cover you, afraid to hide my future baby’s mouth—afraid that she would feel stuck like my wrists under the blue sheets on that night our stepfather uncovered you.

I wanted you to be able to breathe, to spit out the words that his wet tongue whispered into you like a wishing well. To spit out the bones, the tongue, the cheek; your story is anything but tongue and cheek. You are real; you tether me to four generations of women whose wishes echoed into someone else’s mouth. You remind me of my future baby: the one that knows that his words, his hurt, are not a secret.

Breathe slowly; I will never cover your mouth. My lifelines and un-brushed hair, my beautiful wrists and crisscrossed toes have all heard the news through your wavering breath.

I imagine that writing these letters were cathartic and healing to the writers, but I would caution readers that a lot of the material in Portable Homes could be triggering, especially as many of the pieces are quite explicit; that said, I’ve never experienced sexual assault so I imagine folks who have might experience this collection quite differently than I did. Above all, keep this sage advice from the introduction in mind:

This book is not heavy, but a release for those who have survived.

The project is ongoing, and you can check it out and submit your own letter here: http://attnpeoplewithbodyparts.org/   You can also check out their facebook page for up-to-date info on workshops, tours (including in Canada), and past and future projects.

Known in some internet circles as Casey the Canadian Lesbrarian, Casey Stepaniuk is a writer and librarian who holds an MA in English literature. She lives and works in the unceded territory of the Musqueam, Squamish and Tsleil-Waututh First Nations (Vancouver, BC). Topics and activities dear to her heart include cats, bisexuality, libraries, queer (Canadian) literature, running, and drinking tea. She runs the website Casey the Canadian Lesbrarian, where you can find reviews of LGBTQ2IA+ Canadian books, archives of the book advice column Ask Your Friendly Neighbourhood Lesbrarian, and some other queer, bookish stuff. She also writes for Autostraddle, Book Riot and Inside Vancouver. Find her on Twitter: @canlesbrarian. Some of her old reviews, especially the non-Canadian variety, can be found at the Lesbrary.
View all posts by CaseytheCanadianLesbrarian →
This entry was posted in Anthology, Graphic, Non-Canadian, Non-Fiction, Queer and tagged domestic violence, sexual abuse, sexual assault, survivors. Bookmark the permalink.

5 Responses to Reclaiming Bodies, Writing The Self: A Review of Portable Homes, Collected by Lexie Bean