Posted on May 25, 2014 by CaseytheCanadianLesbrarian 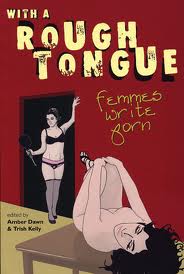 The anthology certainly lives up to its promise of “no-holds barred queer sex tales that reinvent lesbian erotica in ways that are transgressive and empowering.”  Although the classification of the writing as lesbian is odd to me, since there are multiple stories featuring trans men, one featuring a drag queen and a cis man, one featuring a cis woman and man, and at least a few of the authors identify as bi/queer and not lesbian.  While I’m on this topic, I’d like to say that it would’ve been nice if some trans women could’ve been included.  That’s my one and only criticism of this fantastic anthology.  In any case, there are seriously talented writers in here.  In particular, I enjoyed stories by: May Lui, Nalo Hopkinson, Amber Dawn, and Ducky Doolittle.

Lui’s story is quite short and there’s nothing actually extraordinary about it: a woman is sitting in her apartment alone and her lover comes in, interrupts her, and takes her.  Maybe I liked this one a lot because it charts familiar territory where my mind goes when it’s so inclined.  I also like that it’s written in an address to ‘you,’ the lover.  For example:

Suddenly you stop, drag me to my feet, and, holding me tightly, you walk me backward to the nearest wall, where you slam me hard against it, and continue your attack on my senses, your rough seduction.  You grab both my wrists, one in each hand, and hold them down by my hips against the wall, as you bite and nibble at my breasts through my bra, swirling your tongue around my nipples.

Nalo Hopkinson’s story is the strongest in the anthology, no question.  “Fisherman” opens with a reluctant, awkward customer sitting in the lobby of a whore house—the exact place isn’t clear, but it’s definitely somewhere in the Caribbean.  This adorable client, K.C., is especially nervous because they’re not a cis man and are only passing for a regular fisherman like the others in this town.  The sex worker Mary Anne, a smart and sexy woman, reassures the fisherman she would never turn away such an ideal customer and then casually asks “You ever fuck before?”  No, of course, is the fisherman’s answer.  Her response?  “Well doux-doux, is your lucky night tonight; you going to learn from the mistress of the house!”  This is first-time sex erotica really at its finest: it’s hot and really sexy but cute and a bit awkward at the same time.  I’ll just give you a taste of what the fisherman is in for:

She hips bucking like anything.  A strong woman this.  I had to brace myself, wrap one arm around she thigh and hold on tight.  So close in there, I close my hand up in a fist.  I pull back my hand partway, and push it in again.  Pull back, push in.  Pull back, push in.  She start to bawl ’bout don’t stop, fuck she, don’t stop.  I could do that.  I hold on to she bucking body and I fuck she.  Me, K.C.

Amber Dawn’s story also features a sex worker, whose boyfriend is trans; never of them having dated someone like the other before, they’ve both been educating themselves, about trans and sex work issues respectively.   I really liked how this story was a combination of an interesting, realistic look at a relationship and some really hot sex scenes, including one at the woman’s place of work.  Kay and Owen join forces with one of Kay’s co-workers and pretend they don’t know each other:

Only Kay knows just how much she has hungered for this moment.  She opens her mouth and takes him in.  The taste of salt hits the back of her throat.  She gulps it down and take him in a bit more, his soft flesh presses against her tongue.  Her whole body begins to move as she sucks, her ass lifting a little from the floor with each thrust.  The sensation of him sliding from her mouth, then her gently sucking him in again, his wetness dribbling down her chin: all of this makes her dizzy with pleasure.

My last favourite, “Clean Panties” by Ducky Doolittle, is just such an awesome femme twist revenge story on a panty-stealing laundromat pervert.  I almost don’t want to spoil this one by giving anything away, but I just need to share this part:

PS: am I the only one who is reminded of cats with the tongue reference in the title?  That makes me feel a bit awkward.

Known in some internet circles as Casey the Canadian Lesbrarian, Casey Stepaniuk is a writer and librarian who holds an MA in English literature. She lives and works in the unceded territory of the Musqueam, Squamish and Tsleil-Waututh First Nations (Vancouver, BC). Topics and activities dear to her heart include cats, bisexuality, libraries, queer (Canadian) literature, running, and drinking tea. She runs the website Casey the Canadian Lesbrarian, where you can find reviews of LGBTQ2IA+ Canadian books, archives of the book advice column Ask Your Friendly Neighbourhood Lesbrarian, and some other queer, bookish stuff. She also writes for Autostraddle, Book Riot and Inside Vancouver. Find her on Twitter: @canlesbrarian. Some of her old reviews, especially the non-Canadian variety, can be found at the Lesbrary.
View all posts by CaseytheCanadianLesbrarian →
This entry was posted in Amber Dawn, Anthology, BDSM, Bisexual, Butch, Canadian, Caribbean, Erotica, Fiction, Kristyn Dunnion, Lesbian, Nalo Hopkinson, Non-Canadian, Postcolonial, Queer, Sex Work, Short Stories, Trans Feminine, Trans Masculine, Vancouver, Zoe Whittall. Bookmark the permalink.