Posted on August 17, 2014 by CaseytheCanadianLesbrarian 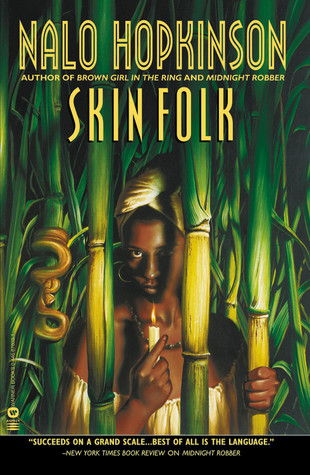 I’ve really been spoilt by fantastic short story collections this summer, and Skin Folk by Nalo Hopkinson is no exception.  When I say fantastic, I mean it in more than one sense: these stories are remarkable, especially wrapped as they are in Hopkinson’s slim but lively prose, but they’re also fantastical: some fairy tales, some fantasy, and some science fiction.  If you enjoy language that’s beautiful but gets to the point and surreal but sounds like real people (“crinkling her face like running a fork through molasses”)—you need to pick up Skin Folk.  In particular, this book’s diverse settings and characters allow Hopkinson to show off her remarkable command of different dialects.  Skin Folk is certainly one of the best collections of fantastic short fiction I’ve ever read, on par with Octavia Butler’s Bloodchild and Other Stories  (but happily, with more sex); in fact, I’d go so far as to say it’s one of the best collections of short fiction period that I’ve ever read.

I think Hopkinson herself describes this collection best in the foreword to the first story:

Throughout the Caribbean, under different names, you’ll find stories about people who aren’t what they seem.  Skin gives these skin folk their human shape.  When the skin comes off, their true selves emerge.  They may be owls.  They may be vampiric balls of fire.  And always, whatever the burden their skins bear, once they remove them—once they get under their own skins—they can fly.  It seemed an apt metaphor to use for these stories collectively.

If this metaphor sounds creepy, yet enticing, then that’s exactly how you should feel.  Not all of these stories are creepy, but some of them certainly will scare the crap out of you.  All the more because of Hopkinson’s expert pacing and deceptively simple language.  In particular, “Snakes,” which is told from the point of a view of a pedophile with whom you identify for a period, not realizing what he is what he is, is absolutely terrifying.  It does, however, have quite a satisfying ending.  “The Glass Bottle Trick,” about a lighter skinned woman who has abandoned her studies to marry to a educated class-privileged man with “molasses-dark skin” is equally chilling, both literally and figuratively.  It’s a brilliant look at shadism and internalized racism.

“A Habit of Waste” begins like any other story about a Toronto commuter, except with a slight twist:

I was nodding off on the streetcar home from work when I saw the woman getting on.  She was wearing the body I used to have!  The shock woke me right up: it was my original, the body I had replaced two years before, same full, tarty-looking lips; same fat thighs, rubbing together with every step; same outsize ass; same narrow torso that seemed grafted onto a lower body a good three sizes bigger, as though God had glued left-over parts together.

Hopkinson uses this sci-fi setting to assess how women might hate their bodies—size and colour—but eventually accept them, in some futuristic way.

My favourite in the collection—aside from “Fisherman” which I’d already read and I’ll talk about in a minute—was “Ganger (Ball Lightning).”  It’s perhaps the craziest story of the bunch of them.  To describe this story makes it sounds quite ludicrous, but it’s actually sexy, funny, and heart-warming at the same time as it’s odd and, uh, horrifying.  Let me explain: at the beginning of the story Cleve and Issy have “been fucking in the Senstim Co-operation’s ‘wetsuits’ for about a week.”  These ‘wetsuits’ heighten your sensitivity to touch, but Issy compares them to

taking a shower with your clothes on.  The suits made you feel more, but it was a one-way sensation.  They dampened the sense of touch.  It was like being trapped inside your own skin, able to sense your response to stimuli but not to feel when you had connected with the outside world.

Issy has what she thinks it a brilliant idea—they should exchange their suits, which have molded to their bodies, so that they can feel what it’s like to have the other’s body.  This sex/gender switch makes the story take an interesting turn that feels quite queer, as in this sentence: “She swore she could feel Cleve’s tight hot cunt closing around her dick.”  All this is fascinating (and sexy) enough but I’ll leave you to read the story and find out what happens when Issy and Cleve don’t put the suits away properly and they decide they have a mind of their own.  What I really loved about this story is that although it’s focused on sexuality, it’s also a sensitive look at a long-term relationship.  You don’t read a lot of sexy stories about couples who have been together a long time.  And, it’s a cool and somewhat scary look at what kind of sex toys there might be in the future.

“Fisherman” opens with a reluctant, awkward customer sitting in the lobby of a whore house—the exact place isn’t clear, but it’s definitely somewhere in the Caribbean.  This adorable client, K.C., is especially nervous because they’re not a cis man and are only passing for a regular fisherman like the others in this town.  The sex worker Mary Anne, a smart and sexy woman, reassures the fisherman she would never turn away such an ideal customer and then casually asks “You ever fuck before?”  No, of course, is the fisherman’s answer.  Her response?  “Well doux-doux, is your lucky night tonight; you going to learn from the mistress of the house!”  This is first-time sex erotica really at its finest: it’s hot and really sexy but cute and a bit awkward at the same time.  I’ll just give you a taste of what the fisherman is in for:

She hips bucking like anything.  A strong woman this.  I had to brace myself, wrap one arm around she thigh and hold on tight.  So close in there, I close my hand up in a fist.  I pull back my hand partway, and push it in again.  Pull back, push in.  Pull back, push in.  She start to bawl ’bout don’t stop, fuck she, don’t stop.  I could do that.  I hold on to she bucking body and I fuck she.  Me, K.C.

Octavia Butler’s perhaps an obvious comparison that I’ve already mentioned, but both she and Nalo Hopkinson make me wonder how another human being’s imagination could possibly come up with such ideas.  If you like Butler’s work, you’ll love Hopkinson, guaranteed.  That wonder-full quality so exemplified in this collection of Hopkinson’s stories makes every single one of them fly just like the skin folk when they’ve revealed their true selves.

Known in some internet circles as Casey the Canadian Lesbrarian, Casey Stepaniuk is a writer and librarian who holds an MA in English literature. She lives and works in the unceded territory of the Musqueam, Squamish and Tsleil-Waututh First Nations (Vancouver, BC). Topics and activities dear to her heart include cats, bisexuality, libraries, queer (Canadian) literature, running, and drinking tea. She runs the website Casey the Canadian Lesbrarian, where you can find reviews of LGBTQ2IA+ Canadian books, archives of the book advice column Ask Your Friendly Neighbourhood Lesbrarian, and some other queer, bookish stuff. She also writes for Autostraddle, Book Riot and Inside Vancouver. Find her on Twitter: @canlesbrarian. Some of her old reviews, especially the non-Canadian variety, can be found at the Lesbrary.
View all posts by CaseytheCanadianLesbrarian →
This entry was posted in Bisexual, Black, Butch, Canadian, Caribbean, Erotica, Fantasy, Fiction, Lesbian, Nalo Hopkinson, Postcolonial, Science Fiction, Sex Work, Short Stories, Toronto and tagged Octavia Butler. Bookmark the permalink.