Posted on January 2, 2015 by CaseytheCanadianLesbrarian

I am mercilessly ripping some of these questions out of order and from various sources that Danika at the Lesbrary used in her end of year book survey. Check hers out too!

Okay, can I just pick two?  A Safe Girl to Love by Casey Plett and Skin Folk by Nalo Hopkinson, both brilliant and unique collections of short stories. Even if you think you don’t like short stories, read these books.

I was pretty excited about Malena Watrous’s If You Follow Me because it was about a bisexual ESL teacher (like me!) but I kinda hated it actually.  The main character was a spoiled, self-indulgent American whose fish out of water antics in Japan were just annoying and culturally insensitive.

Ellen Forney, who’s a bisexual cartoonist from Seattle.  Her graphic memoir Marbles: Mania, Depression, Michelangelo, and Me, about being an artist with bipolar disorder, was so so good.  It’s sad, funny, smart, and the drawings are (pun intended) crazy good.

I started reading the Saga series this year, and am now totally hooked on these science fiction comics featuring women of colour kicking ass.  I can’t believe it was around for so long before I started it but I am kind of glad I had a bunch to read when I did finally pick it up, because waiting to find out what is going to happen next is now agonizing.

Probably the Saga series, or Sarah Waters’s The Paying Guests (the second half, at least) 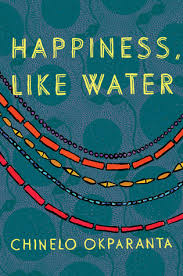 love this question!  Happiness, Like Water by Chinelo Okparanta and I’ve Got a Time Bomb by Sybil Lamb—which is illustrated by the author—both have gorgeous and fitting covers.

I will never forget the main character of When Everything Feels Like the Movies by Raziel Reid.  He’s an impossibly brave, brash, no-holds-barred queer teen.  He’s flamboyant, unapologetic, foul-mouthed, and gender-non-conformist.  I loved him.

Moving Forward Sideways Like a Crab by Shani Mootoo, which is simply a masterpiece of gorgeous writing.

Surely it is a failure of our human design that it takes not an hour, not a day, but much, much longer to relay what flashes through the mind with the speed of a hummingbird’s wing.

Hmm, great question.  I’ve never thought about literary crushes before, except perhaps my love for both Ron and Hermione from Harry Potter.  I really liked Em, the cool-headed sweet BFF of the main character in Leigh Matthews Don’t Bang the Barista.  Also, Josh, the trans guy in Zoe Whittall’s Holding Still for as Long as Possible, was very appealing to me even though I said in my review I thought he was boring.  He was also stable, sweet, and calm, so maybe that’s my type, since Em was very much like that too.

Nalo Hopkinson in her story collection Skin Folk, hands down.  She builds amazing worlds in the limited space of short stories!  Like one where in a future Toronto you might get on the bus and see someone else wearing your old body.  Or one where your full-body sex toy suits escape from the closet and attack you and your partner.  Or where a relentless wind full of miniscule shards of glass continually ravages your hometown.  Fucking brilliant, seriously.

I feel like whether a book made my cry or not might be a better indicator of where I was in my menstrual cycle at the time, but the ending of When Everything Feels Like the Movies made me burst into tears in public.  {Trigger warning: there’s a homophobic hate crime in that book}  I also found Moving Forward Sideways Like a Crab really moving, but I don’t remember if I actually cried or not.

Prairie Ostrich by Tamai Kobayashi and Letters Lived: Radical Reflections, Revolutionary Paths edited by Sheila Sampath were two books sent to me for review, and I had no expectations of either of them.  They both ended up being spectacular.

No question, Casey Plett’s A Safe Girl to Love.  This born writer really gets her characters, and she can really write.  I’m super excited to see what she does next.

Known in some internet circles as Casey the Canadian Lesbrarian, Casey Stepaniuk is a writer and librarian who holds an MA in English literature. She lives and works in the unceded territory of the Musqueam, Squamish and Tsleil-Waututh First Nations (Vancouver, BC). Topics and activities dear to her heart include cats, bisexuality, libraries, queer (Canadian) literature, running, and drinking tea. She runs the website Casey the Canadian Lesbrarian, where you can find reviews of LGBTQ2IA+ Canadian books, archives of the book advice column Ask Your Friendly Neighbourhood Lesbrarian, and some other queer, bookish stuff. She also writes for Autostraddle, Book Riot and Inside Vancouver. Find her on Twitter: @canlesbrarian. Some of her old reviews, especially the non-Canadian variety, can be found at the Lesbrary.
View all posts by CaseytheCanadianLesbrarian →
This entry was posted in Amber Dawn, Anthology, Asian, BDSM, Bisexual, Black, Canadian, Erotica, Fiction, Lesbian, Nalo Hopkinson, Non-Canadian, Postcolonial, Queer, Shani Mootoo, Short Stories, South Asian, Toronto, Trans, Trans Feminine, Trans Masculine, Zoe Whittall and tagged best of 2014, books, reading survey. Bookmark the permalink.

Leave a Reply to Danika @ The Lesbrary Cancel reply