Posted on April 15, 2015 by CaseytheCanadianLesbrarian

I love your blog! I am looking for books with main characters who are genderqueer! (and also queer sexuality too obv) I have relatively recently realised that I’m demigirl/ genderqueer/non-binary/trans and I am looking for mirrors! I would really like to read a book about people who feel the way i do! Particularly Genderqueer people. I’ve already read Gender Failure, which was utterly utterly beautiful! and I prefer fiction, and Young Adult (I’m 19), so I just wondered if you could help!  Thanks!! keep on being super cool!!!

Congrats on figuring out who you are and thanks so much for sending your question!  It’s a certain genre of books I had never given a lot of thought to before you sent your email.  I was a bit worried that I wouldn’t be able to find enough to recommend you, but when I got down to business I realized there were actually a really good bunch of books here.  If you’d like to check out some of the resources I used, you can have a look at the trans page at the GayYA website and this list of trans teen lit and this one of non-binary fiction and memoir on goodreads.  Let’s get to it! 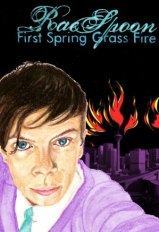 So, since you loved Gender Failure by Ivan Coyote and Rae Spoon, you should definitely check out Rae Spoon’s earlier book, First Spring Grass Fire .  First Spring Grass Fire was published a few years ago and follows the adventures of Rae, a gender-non-normative kid growing up in Calgary in the 80s and 90s.  This collection of unassuming, quietly devastating short stories is deceptively simple.  They’re kind of in between fiction and non-fiction, like they’re about a Rae, written by Rae, but are presented as stories.  The language, tone, and structure of the book are all casual and familiar.  Their stories feel like they’d be right at home being read aloud while sitting around the kitchen table after supper.  Rae writes about family, growing up in a strict Christian house, and the salvation music offered them.  It’s a great book and I’m sure you’ll love it if you loved Gender Failure.

Again, since you loved Gender Failure, you have to read One in Every Crowd by Ivan Coyote.  One in Every Crowd is a collection of stories put together especially for teens, and includes some stories from Ivan’s previous short story collections.  This book contains one of my all-time favourite Ivan Coyote stories, “No Bikini,” which has what is quite possibly one of the best first lines of fiction ever: “I had a sex change once, when I was six years old.”  You also get to hear all about Ivan’s work reading and doing workshops at high schools, and some tough stuff too, like suicide and bullying.  If you really like Ivan’s writing, you should have a look at their other short story collections; I especially like Slow Fix and Loose End.  Keep in mind they don’t have much content for or about young adults specifically, although I think really they’re stories that pretty much everyone would enjoy. 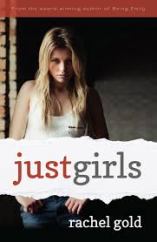 I got some great recommendations from RJ Edwards, themselves a non-binary writer who has a fantastic science fiction story in The Collection, a book of stories by trans writers, edited by Tom Leger and Riley MacLeod, that you might want to read too.   Thanks RJ for the recommendations! They really like Just Girls by Rachel Gold, which is a novel set in the first year of college—just about the age you are Anna!  It features both a trans girl and her genderqueer friend Nico.  The premise of this novel is pretty unique: Jess, a cis lesbian who’s been out and proud since high school, deliberately “outs” herself as trans to combat some nasty transphobic gossip going around about a new trans girl in the dorms.  Jess figures she can take the heat off the target of this hate.  The woman who is actually trans is Ella (also, Ella is bisexual).  Danika at the Lesbrary really liked this book too.

RJ also suggests Freakboy by Kristin Elizabeth Clark, which is about a genderfluid teen figuring out their identity.  Freakboy is a novel-in-verse, meaning that it’s actually all written in poetry!  So it’s probably the only novel-in-verse about a non-binary teen  ever.  From reading some reviews, I got the sense that even readers who were skeptical about the poetry part really liked Freakboy.  There’s also a trans girl in this book, and you get her perspective, as well as the genderfluid teen and their girlfriend.  What seems great about both Just Girls and Freakboy is that they feature strong trans teens friendships! 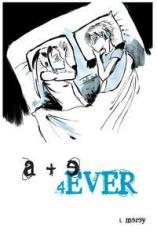 A + E 4ever by i. merey is a graphic novel featuring a genderqueer teen!  So awesome.  A fellow librarian who always has great opinions on books says in her goodreads review that A + E 4ever is “maybe the queerest book I’ve read for teens, in that so many lines and genders and sexualities are blurred and confused.”  It’s also about a friendship between two queer teens, one a “lonely tough-talking dyke” and a genderqueer (maybe bi identifying) teen named Ash.   Be warned, this book does deal with some tough stuff, touching on rape, bullying, drug use, and just plain teenage loneliness.  A lot of reviewers I read highlighted the authentic, real feel of the teens in this book, which is something really hard to pull off! 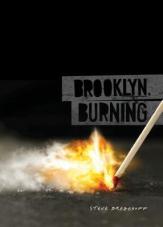 Danika from the Lesbrary mentioned Brooklyn, Burning by Steve Brezenoff when I was on the look-out for genderqueer YA, and I think this one looks really good.  Like a lot of YA, it’s a gritty coming-of-age story, but it follows a queer teen named Kid living on the streets after their family has refused to accept their identity.  The book never genders Kid, so it’s obviously different than a self-identified non-binary person, but we know they’ve been kicked out for being “undecided.”   The writing looks gorgeous and understated.  Look at this excerpt:

I just stood, watching him, listening to the melody he hummed. Even without words, it haunted me–filled the room and everything in it. The visions it gave me: they were dark, but beautiful. They took me out of the cellar, up to the rooftops at night on the lower East side, down into the subway, onto the tracks, and into the tunnels. They brought me deep into the city, deeper than anyone can ever really go: into its heart.

Can you miss someone before they’re gone, when they’re still smiling up at you with closed eyes, and their beautiful face, with its deep-set eyes and two days of beard, is rolling slowly between your knees?

You definitely need to check out genderqueer author Sassafras Lowrey: in particular, hir books Roving Pack and Lost Boi , which is hot off the press.  Roving Pack also follows a homeless teen, a group of them actually, and centres on “Click, a straight-edge transgender kid searching for community, identity, and connection amidst chaos.”  Set in Portland, Orgeon, Roving Pack investigates a lot of different identities, and Click’s journey with them: punk, alternative, leather, and genderqueer.  The book deals head-on with some of the harsh realities of being non-binary in a very binary world, even in trans communities.  A lot of reviews I read by genderqueer folks said Roving Pack resonated so much for them, and is such a treasured book even though it’s tough to read at times.  Trigger warning that it does include material about abusive relationships in a BDSM context. 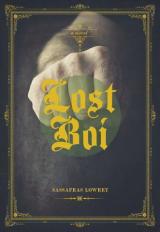 Lost Boi, if you can tell by the title, is a re-telling of Peter Pan, which if you think about it is pretty queer to begin with, so I imagine there’s a lot Lowrey could do with it.  Here’s the synopsis:

Pan’s best boi Tootles narrates this tale of the lost bois who call the Neverland squat home, creating their own idea of family, united in their allegiance to Pan, the boi who cannot be broken, and in their refusal to join ranks with Hook and the leather Pirates. Like a fever-pitched dream, Lost Boi situates a children’s fantasy within a transgressive alternative reality, chronicling the lost bois’ search for belonging and purpose, and their struggle against the biggest foe of all: growing up.

Jack Halberstam says: “A punk Peter Pan, pirates, perverts, mermaids, bois and a grrrl called Wendi … what more do you want, what more could you want? Take a wild ride to Neverland, you will not be disappointed. This book simply breaks every mold.”

Lizard Radio by Pat Schmatz doesn’t come out until September this year, but it looks really unique.  A genderqueer character in an alternate reality??  There’s an author interview here to get you excited; also, check out the publisher’s description:

Fifteen-year-old bender Kivali has had a rough time in a gender-rigid culture. Abandoned as a baby and raised by Sheila, an ardent nonconformist, Kivali has always been surrounded by uncertainty. Where did she come from? Is it true what Sheila says, that she was deposited on Earth by the mysterious saurians? What are you? people ask, and Kivali isn’t sure. Boy/girl? Human/lizard? Both/neither? Now she’s in CropCamp, with all of its schedules and regs, and the first real friends she’s ever had. Strange occurrences and complicated relationships raise questions Kivali has never before had to consider. But she has a gift—the power to enter a trancelike state to harness the “knowings” inside her. She has Lizard Radio. Will it be enough to save her?

Last but certainly not least, Pantomine and Shadowplay by Laura Lam are part of an ongoing series of high fantasy Victorian-era books (aka, the Micah Grey books) featuring a main character that is both intersex and genderqueer.  Amazing!  These two were recommended by GayYA staffer Vee, who say the non-binary representation is great!  Do not be put off by the official blurb for these books, which makes it look like they’re about a star-crossed straight love story.  That is far from the truth!  There’s running away to the circus!  There’s magic!  The main focus of the book is not transition, gender identity, or the character’s intersexuality or sexuality!  Micah is bisexual!  Really, could this series get any more amazing?  Probably not.  Check out this glowing review of the second book from the bisexual books tumblr, where Sarah says it’s one of her favourites, a can’t-put-it-down kind of read, and one she’s anxiously waiting to read the next installment of.

That’s it from my end, folks!  Any other recommendations?

Known in some internet circles as Casey the Canadian Lesbrarian, Casey Stepaniuk is a writer and librarian who holds an MA in English literature. She lives and works in the unceded territory of the Musqueam, Squamish and Tsleil-Waututh First Nations (Vancouver, BC). Topics and activities dear to her heart include cats, bisexuality, libraries, queer (Canadian) literature, running, and drinking tea. She runs the website Casey the Canadian Lesbrarian, where you can find reviews of LGBTQ2IA+ Canadian books, archives of the book advice column Ask Your Friendly Neighbourhood Lesbrarian, and some other queer, bookish stuff. She also writes for Autostraddle, Book Riot and Inside Vancouver. Find her on Twitter: @canlesbrarian. Some of her old reviews, especially the non-Canadian variety, can be found at the Lesbrary.
View all posts by CaseytheCanadianLesbrarian →
This entry was posted in ask your friendly neighbourhood lesbrarian, Fantasy, Fiction, Queer, Transgender, Young Adult and tagged ask your friendly neighbourhood lesbrarian, genderqueer, non-binary trans. Bookmark the permalink.