Ask Your Friendly Neighbourhood Lesbrarian # 6: Books about Queerness and Disability

Posted on May 24, 2015 by CaseytheCanadianLesbrarian

It’s been lovely to follow you on here! I had a book related question for you. If you’re unable/don’t have the time to answer, no problem! I was just wondering if you knew of any non-fiction/theory books about queerness & disability? I’ve already read Feminist Queer Crip & am thinking about reading Crip Theory, but if you know of any others, that’d be great.

Thanks so much!
Carri

Thanks for the question!  I am definitely no expert on academic queer theory, but I was really interested in researching books about queerness and disability.  If you don’t mind, I’ll include some fiction, memoir, and poetry at the end here since I think other readers might be interested in those as well as more academic/theoretical studies of disability and LGBTQ issues. 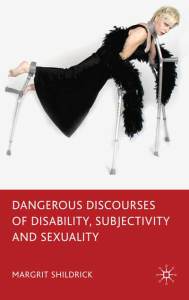 Have you checked out this list on goodreads of queer disability study books?  You probably know more than I do, so you should have a look and see what looks up your alley!  Dangerous Discourses of Disability, Subjectivity, and Sexuality by Margit Shildrick looks especially good.  It doesn’t mention queerness in the title, but the synopsis does:

This innovative and adventurous work uses broadly feminist and postmodernist modes of analysis to explore what motivates damaging attitudes and practices towards disability. Margrit Shildrick argues for the significance of the psycho-social imaginary, and suggests a way forward in disability’s queering of normative paradigms.

While doing my research, I also noticed that my goodreads friend Megan Milks—a queer writer whose wacky and imaginative writing I really respect—gave the book you mention, Feminist Queer Crip by Alison Kafer, five stars.  I checked out the books Milks has on her disability shelf, and came up some other fantastic sounding options, like Depression: A Public Feeling by Ann Cvetkovich, which the author half-jokingly, half not describes as a queer academic self-help book.  This sounds like such a unique combination I’m almost tempted to read it, even though I’m not really an academic anymore.

You should also have a look at a book edited by Megan Milks, Asexualities: Feminist and Queer Perspectives, which is the first scholarly collection of essays on the topic of asexuality, and contains some essays dealing with asexuality and disability.  Sex and Disability edited by Robert McRuer also seems worth your while.  It’s actually a more recent book by the same editor/author of Crip Theory, which you mention you are thinking of reading.  [FYI: I read some criticisms of Crip Theory for not dealing with trans folks or people of colour, so keep that in mind.]  The essays in Sex and Disability

consider how sex and disability come together and how disabled people negotiate sex and sexual identities in ableist and heteronormative culture. Queering disability studies, while also expanding the purview of queer and sexuality studies, these essays shake up notions about who and what is sexy and sexualizable, what counts as sex, and what desire is.

Have you also considered picking up the perhaps obvious choice The Disability Studies Reader edited by Lennard J. Davis?  One reader actually says this collection is a bit heavy on queer studies, which I think is supposed to be a flaw (?) but for our interests is obviously a plus.  It seems to be the standard introduction to disability studies, which must mean it’s pretty solid.

You might not have considered the controversial anthology Gay Shame edited by David M. Halperin and Valerie Traub, which contains a few pieces looking at the intersections between queerness and disability.  Gayle Rubin’s essay, about race, ability, and queerness, seems to be a favourite of many readers, even if they didn’t like the collection as a whole.

Bonus!  Here are some other books that are about disability and LGBTQ folks, which are on the fiction, poetry, or memoir side.

Girl in Need of a Tourniquet: Memoir of a Borderline Personality by Merri Lisa Johnson looks fascinating.  It’s a personal autobiographical account as well as some more clinical details.  One reader calls it a “ big beautiful mess” and many reviews praised the wonderful writing.  Johnson devotes a number of chapters to discussing her queer sexuality.  Check this quotation out:

It isn’t any particular person I want to lie down with and make my own. It isn’t anybody at all. It is the feeling of being taken care of that I want to pin down and rock my hips against. Sling a leg across it and fall asleep.

This longing for body comfort and security is familiar as my own face.

The need is urgent.

The need makes me stupid.

Leah Lakshmi Piepzna-Samarasinha’s most recent collection of poetry, Bodymap, is all about talking about disability through the lens of a queer femme of colour poet.  Some of these poems are just gorgeous:

carrying bones that ache and shiver out the house

to every doctor’s appointment, play party, the bridge not the bus.

some people have a house at 38:

I am thirty-four and when I start fucking you and the other one,

I decide I don’t want to date anyone who’s not a crip ever again.

Same as when the end of white boys happened, I sink gratefully

into the pleasure of never having to explain.

Leah Lakshmi Piepzna-Samarasinha also has a memoir coming out in the fall, called Dirty River: A Queer Femme of Color Dreaming Her Way Home.  I can’t wait to read it.   Look how beautiful the cover is!! Also, the synopsis:

In 1996, poet Leah Lakshmi Piepzna-Samarasinha ran away from America with two backpacks and ended up in Canada, where she discovered queer anarchopunk love and revolution, yet remained haunted by the reasons she left home in the first place. This passionate and riveting memoir is a mixtape of dreams and nightmares, of immigration court lineups and queer South Asian dance nights; it reveals how a disabled queer woman of color and abuse survivor navigates the dirty river of the past and finds home.

I mentioned Everett Moon’s fantasy YA novel, The Unintentional Time Traveler, in a recent post about trans YA books that don’t focus on transition.  Not only does this book feature time travel, it’s by a trans writer about a trans main character, and the main character also has epilepsy, which is why he finds himself participating in an experimental clinical trial that somehow ends up sending him into someone else’s body, in another time.

Last but not least, I’ve been meaning to pick up the memoir Mean Little Deaf Queer by Terry Galloway forever, and still haven’t gotten around to it.  One day.  Galloway is a writer and performer, and the book is organized into kind of performance pieces rather than a linear narrative.  A few reviews I’ve read comment on how this memoir manages to be hilarious, following Galloway on the crazy shenanigans of her life, while at the same time an undercurrent of pain runs throughout.  It sounds like a difficult but worthwhile, moving read.

Known in some internet circles as Casey the Canadian Lesbrarian, Casey Stepaniuk is a writer and librarian who holds an MA in English literature. She lives and works in the unceded territory of the Musqueam, Squamish and Tsleil-Waututh First Nations (Vancouver, BC). Topics and activities dear to her heart include cats, bisexuality, libraries, queer (Canadian) literature, running, and drinking tea. She runs the website Casey the Canadian Lesbrarian, where you can find reviews of LGBTQ2IA+ Canadian books, archives of the book advice column Ask Your Friendly Neighbourhood Lesbrarian, and some other queer, bookish stuff. She also writes for Autostraddle, Book Riot and Inside Vancouver. Find her on Twitter: @canlesbrarian. Some of her old reviews, especially the non-Canadian variety, can be found at the Lesbrary.
View all posts by CaseytheCanadianLesbrarian →
This entry was posted in ask your friendly neighbourhood lesbrarian, Canadian, disability, Non-Canadian, Non-Fiction, Poetry, South Asian, Trans Masculine and tagged ask your friendly neighbourhood lesbrarian, Disability, mental illness, queer theory. Bookmark the permalink.

6 Responses to Ask Your Friendly Neighbourhood Lesbrarian # 6: Books about Queerness and Disability