A Comic as Weird and Rad as It Sounds: A Review of RAT QUEENS, Volumes 1 and 2

Posted on April 25, 2016 by CaseytheCanadianLesbrarian

Rat Queens by Vancouver writer Kurtis J. Wiebe and American illustrators Roc Upchurch and Stjepan Sejic is one of those comics that, when people try to describe it, ends up sounding like the most bizarre combination of the most disparate media you’ve ever heard of. It’s like Sex and the City meets Lord of the Rings? Dungeons and Dragons mixed with Girls? Buffy the Vampire Slayer and Tank Girl but set in an timeless, kind of Medieval fantasy world?

To be honest, the strange pictures

you’re probably getting in your head from trying to imagine how all that media could be mixed together in a comic are likely pretty accurate. Yes, Rat Queens is as weird as all those comparisons imply. But it’s also just as rad as you might guess, taking all the awesomeness of Buffy, LOTR, SITC, Tank Girl, Girls, and D & D respectively to concoct something new, like the best mash-up ever.

So, like Girls and SITC, Rat Queens features a cast of complex, flawed women, all kick-ass in their own way. You’ve got the leader Hannah, a pale elf with flashy spell-casting powers, a high level of sass, a rockabilly sense of style, a messed-up past, and a penchant for dating the wrong men. Then there’s Dee, a quiet, socially awkward atheist who comes from a family and culture that worship a giant squid god; she’s got witchy / priestess powers too, but more of the bookish type. Violet is a formerly-bearded dwarf who’s rebelled against her family’s traditions by leaving home and shaving her beard; she wields a giant sword skillfully wherever she goes. And then there’s Betty, the resident queer and comic relief: she’s a hobbit with blonde dreads who loves candy, being a sneaky sneaky thief, recreational drugs, and booze.

Can you tell me which one’s which?

Actually, it’s not just Betty who loves booze: it’s every Rat Queen. That, and their superior skills at kicking ass and killing bad guys is what brings these ladies together. So if you love books where interesting, fleshed-out women get together to use their skills to fight evil, that might be all you need to know to rush out and read this, if you haven’t already.

But there are so many other things to love about this series: the fact that women’s diverse body types are highlighted, the gorgeous gorgeous art, dead-pan and dark humour, satire that at once is affectionate and critical of the fantasy tropes it’s drawing on, deliberate anachronisms, and a decent job featuring people of colour (although, I’d like to see more—Dee is the only Rat Queen who’s not white). The secondary characters are also extremely well done: a gentle, giant Orc named Dave who keeps bluebirds in his huge black beard; Sawyer, a studly and serious police chief (and POC!) with a weakness for Hannah; Betty’s hot kind-of girlfriend Faeyri who sports a classic lesbian haircut, a septum piercing, and a no nonsense attitude; and many more! 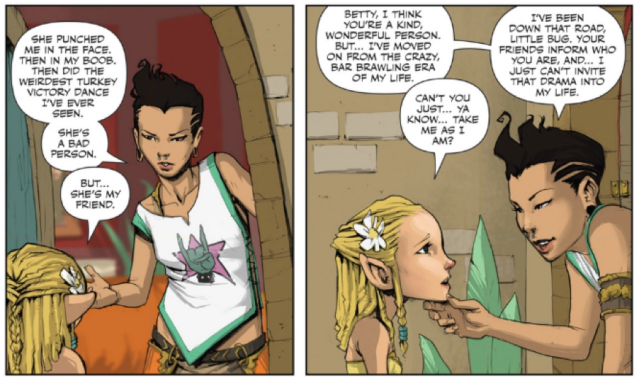 Some warnings: Rat Queens might not be to your taste if you’re sensitive about gore, crassness, drinking to excess, drugs, and fantasy violence. Personally, although I don’t read comics especially for any of that stuff, the over-the-top excess of all of it felt really fitting to me, in a similar way that Buffy works so well despite/because of campiness. The humour reminds me a lot of Buffy actually, although in terms of vulgarity it’s more akin to Tank Girl.

The plot—in both volumes one and two—is sometimes all over the place, but honestly that’s kind of not the point, and I was so in love with the characters, humour, and the setting that I just didn’t really care. One plot point I especially appreciated in volume 2 is that Hannah’s lover / ex / police chief / resident sexy guy Sawyer is the one who needs rescuing! Ha, it’s no surprise there are no damsels in distress to be found in Rat Queens, but it was pretty terrific that the strong tough guy needed to be saved by the Rat Queens. 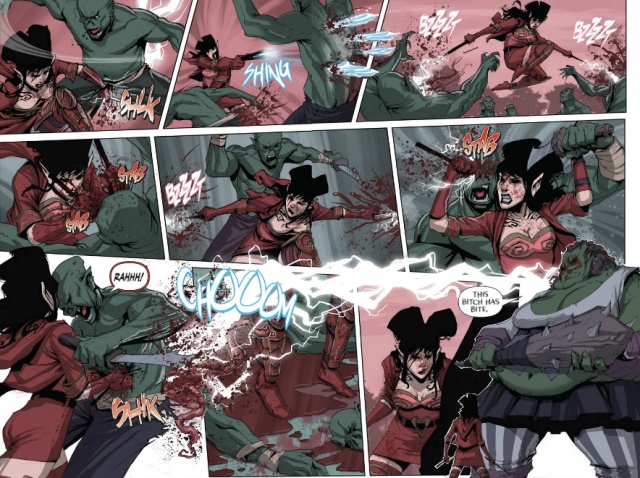 If you feel like volume 1 is a little light on character history, volume 2 is chock full of it, so you can look forward to that! Probably my only complaint about volume 2 is that I still feel like Dee is more of an enigma than the other girls, even though there was a big multi-issue arc on her and her history. Not really sure why that is; maybe it’s just that she’s outshined by the other bigger personalities. That, and I sometimes wish there was more sex in this comic, maybe to balance out the violence? That said, the Rat Queens do talk about sex a lot and go after whoever they want, which is probably where the SITC comparisons come in. 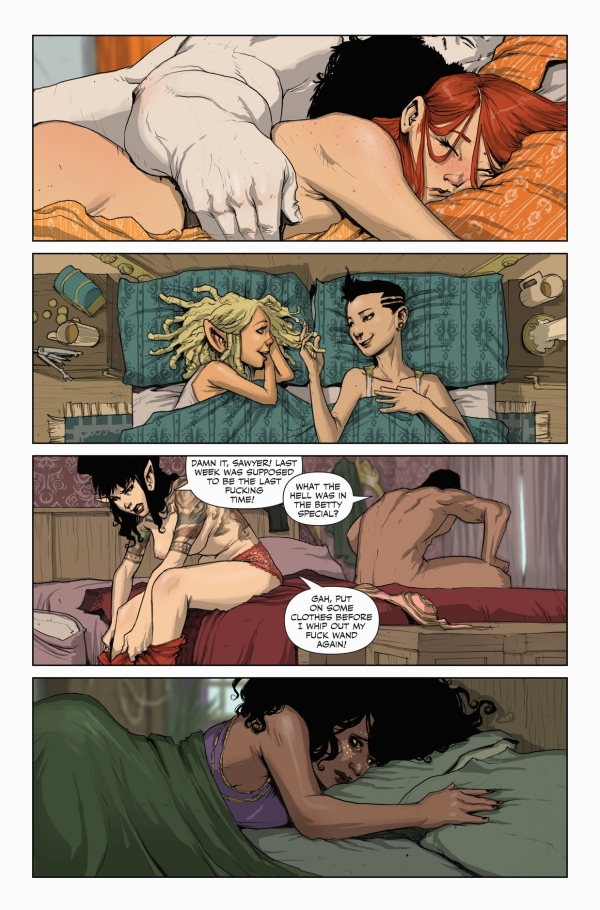 The morning after their victory party; where volume 2 starts.

Volume 3 just came out a few weeks ago, and I can’t believe I haven’t picked it up yet! But, that means if you haven’t read this series yet, you have 3! volumes that you can binge read all in one day. That is a pretty exciting prospect.

Known in some internet circles as Casey the Canadian Lesbrarian, Casey Stepaniuk is a writer and librarian who holds an MA in English literature. She lives and works in the unceded territory of the Musqueam, Squamish and Tsleil-Waututh First Nations (Vancouver, BC). Topics and activities dear to her heart include cats, bisexuality, libraries, queer (Canadian) literature, running, and drinking tea. She runs the website Casey the Canadian Lesbrarian, where you can find reviews of LGBTQ2IA+ Canadian books, archives of the book advice column Ask Your Friendly Neighbourhood Lesbrarian, and some other queer, bookish stuff. She also writes for Autostraddle, Book Riot and Inside Vancouver. Find her on Twitter: @canlesbrarian. Some of her old reviews, especially the non-Canadian variety, can be found at the Lesbrary.
View all posts by CaseytheCanadianLesbrarian →
This entry was posted in Black, Canadian, comics, Fantasy, Fiction, Graphic, Queer and tagged comics. Bookmark the permalink.