“Unspoken, the questions were like childhood garments stored carefully for decades within a satin-lined trunk”: A Review of ALL INCLUSIVE by Farzana Doctor

Posted on June 27, 2016 by CaseytheCanadianLesbrarian

Toronto-based, Lambda-award-winning novelist Farzana Doctor’s latest book All Inclusive is nothing short of extraordinary. As always with Doctor’s novels (this is her third), there’s her trademark sharp insight into the human psyche and this gentle, calming, empathetic lens as she explores her characters. You can see how she is also a social worker who practices psychotherapy. But her latest book is what I’ve come to expect from her and more. As cliché as this might sound, I’ve really never read anything like All Inclusive before. It manages to take so many different themes and kinds of people, throwing them together to make this kind of magical, delicious soup of a story when you imagined it would turn into some inedible slop. Here are some of the ingredients:

Ameera is our main character. (Or is she really? That’s a bit debatable). At any rate, she’s our first focus in the novel and she’s a woman in her late twenties who’s been working in the tourist / travel industry for years and is coming up to the end of a contract working at an all-inclusive in Mexico. Her life there is far from the expectations of paradise that the entitled visitors, who she has to work with every day, have created.  Since Ameera arrived, she’s discovered she’s bisexual and enjoys having sex with (mostly man-woman) couples, many of whom identify as swingers. She’s from Hamilton, ON and was raised by a single (white) mother, having had an absent (Indian) father. So she has the brown skin of her fellow Indo-Canadians but doesn’t really have much of a connection to that culture. If I had to pick one word to describe Ameera, it would be: lost.

But just when you’re settling into her story, maybe feeling a bit scandalized by the mention on the second page of Ameera sleeping with a bodybuilder couple, the perspective of the novel shifts, and we get someone named Azeez, but back in 1985 instead of Ameera’s 2015. If you’ve read the back of the book, you guess immediately that Azeez is Ameera’s father and you know that he’s never been a part of her life. But you’ll probably never guess what his story is, and why he disappeared. Be forewarned: spoilers abound after this point (although in my opinion, they’re not that crucial, as they are revealed fairly early on).

Again, just as you’ve settled in to the alternating perspectives of Ameera and Azeez, wondering how one day they will finally meet, Doctor pulls the rug out from under you: Azeez was one of the 329 victims of the Air India bombing on June 23, 1985. Ameera will never know her father because he died before he even knew he was going to be one. Or will she?

I admit, after Azeez died, I thought, how is Doctor going to continue the book now? Without skipping a beat, as it turns out. As a spirit, Azeez resumes telling his story, which is far from over. This is one of the many unexpected, fascinating turns that the novel takes. If you were expecting a sexy beach read full of threesomes, well, you’ll get that, but it’s not all you’re going to get. Because of Azeez’s story, All Inclusive also becomes a deeply spiritual story that asks (and answers) some difficult, basic questions: what happens to us after we die? What effect do our ancestors and deceased loved ones have on us? How do we remember and honour all of those people who died? Can we communicate with people who have passed away? 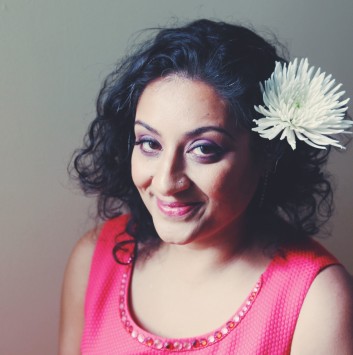 In addition to spirituality, All Inclusive also has a lot to say about sexuality. I really loved how Doctor wrote about sexual exploration and sexual identity in this book. In this really amazing interview with Shelagh Rogers, she says that one of her motivations for the story was that she wanted to write about people from communities who are on the margins and less understood and break stereotypes about them. She also talks about sex-negativity and slut-shaming in our society, about how so many of us think and worry about sex all the time but are not actually that comfortable talking about it. You feel those motivations running through her writing about Ameera’s sexuality. The sex scenes are sexy and liberating, but also sometimes messy and awkward. If you’re not non-monogamous or don’t know much about non-monogamy, you might find yourself a little challenged.

Ameera’s sexual journey and exploration are portrayed as vital aspects of her, but not the only interesting or important parts about her as a person. She’s not a sex-crazed, duplicitous person even though she’s bisexual and non-monogamous, two groups often accused of both. And the swingers she dates are also shown to be all sorts of different people: one or two turn out to be jerks, but most are these interesting, flawed, kind people. I imagine that for some readers, this is one of, or perhaps the only, book that reflects their sexual identity and exploration of their desires without condemning or vilifying them. Doctor is also keenly aware that Ameera’s sexual exploration is an essential part of her growth as a person, figuring out what her needs, wants, and boundaries are in all areas of her life.

If someone had told me, hey, this new book All Inclusive is a critical look at all-inclusive resorts, bisexuality, swinging and polyamory, spirituality, death, and terrorism, I probably would have said, are you kidding? That sounds like a disaster. If someone had told me that same book was a vehicle to remember the Air India bombing as a Canadian tragedy, resisting the racism that resulted in the people who died not being considered “truly” Canadian because they had Indian background, I probably would have just not believed them.

How is it that Doctor has managed to take all these disparate themes and create a truly engaging, affecting novel that is also smart, sexy, and funny? I don’t know, but you should pick up the book to experience it for yourself.

Known in some internet circles as Casey the Canadian Lesbrarian, Casey Stepaniuk is a writer and librarian who holds an MA in English literature. She lives and works in the unceded territory of the Musqueam, Squamish and Tsleil-Waututh First Nations (Vancouver, BC). Topics and activities dear to her heart include cats, bisexuality, libraries, queer (Canadian) literature, running, and drinking tea. She runs the website Casey the Canadian Lesbrarian, where you can find reviews of LGBTQ2IA+ Canadian books, archives of the book advice column Ask Your Friendly Neighbourhood Lesbrarian, and some other queer, bookish stuff. She also writes for Autostraddle, Book Riot and Inside Vancouver. Find her on Twitter: @canlesbrarian. Some of her old reviews, especially the non-Canadian variety, can be found at the Lesbrary.
View all posts by CaseytheCanadianLesbrarian →
This entry was posted in Bisexual, Canadian, Farzana Doctor, Fiction, Queer, South Asian and tagged Air India bombing, polyamory, swinging. Bookmark the permalink.

21 Responses to “Unspoken, the questions were like childhood garments stored carefully for decades within a satin-lined trunk”: A Review of ALL INCLUSIVE by Farzana Doctor