Posted on September 1, 2016 by CaseytheCanadianLesbrarian 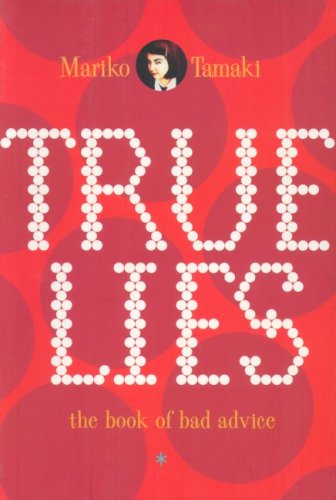 Humour—what exactly each person finds funny—is such a personal thing. I mean, it’s about as personal as what turns you on and what kind of erotica/porn you like. So reviewing True Lies: The Book of Bad Advice, Mariko Tamaki’s collection of funny essays/stories-that-are-true-but-kind-of-not-true, and telling you which ones I thought were funny feels a bit weird. I mean, how am I to know what I think is funny is what anyone else would find funny?

So let me tell you all about this odd little book of writing that doesn’t quite know what it is. It reads very much like a comedy set, actually; you can just picture Mariko Tamaki standing up on a stage with a mic walking around telling you hilarious embellished stories about her life. (A lot of these stories were performed on various stages in Toronto, in fact). Reading this book is like sitting down for coffee with your really funny friend, and having to ask them when they’re finished, “No, but really. Did it really happen like that?”

Tamaki warns in the introduction: “I have no problem admitting that I am a liar at heart. It’s true. I am.” She then goes on to “compare lies to pearls: they look better strung together in a set.” Of course, when you’re reading the stories, you have no idea where the truth ends and the lies begin. But does it really matter?

Some of the most hilarious stories, however, have seemingly innocuous titles. “A Tawdry Dukes of Hazard” involves an unfortunate childhood misunderstanding of the word “molester.” There’s also an unfortunate misspelling of tights in this story, where a young Mariko needing a jazz dance uniform leaves a note for her parents indicating “Must have black tits by tomorrow.”

“Within Reason” provides an amusing list of reasons you may not be getting laid that have nothing to do with “greater forces” like astrology. Such reasons include your friends being too good-looking, everyone thinking you’re sleeping with your BFF, being a fag hag, and being a bad kisser and/or a bad dancer.Don’t worry there are elaborations on these reasons in case you’re thinking of protesting. 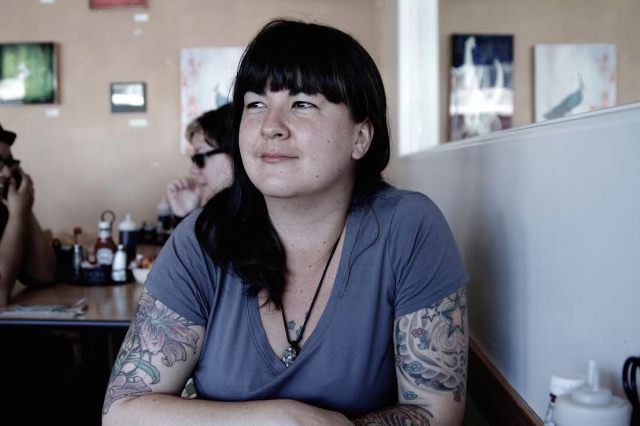 If you’re familiar with Tamaki’s other YA work like (You) Set Me on Fire, you’ll find a similar brand of dark humour in True Lies; it’s edgier and darker than some of her later work though, especially her most recent book Saving Montgomery Sole. And, of course, there’s all the grown-up stuff in True Lies that would never make it into a YA novel. While it’s not the most even of story collections—some I just, gasp, didn’t find funny—this short little book is well worth your time for the genuine hilarity that some of the weirdo tales provide.

Known in some internet circles as Casey the Canadian Lesbrarian, Casey Stepaniuk is a writer and librarian who holds an MA in English literature. She lives and works in the unceded territory of the Snuneymuxw First Nation (Nanaimo, BC). Topics and activities dear to her heart include cats, bisexuality, libraries, queer (Canadian) literature, running, and drinking tea. She runs the website Casey the Canadian Lesbrarian, where you can find reviews of LGBTQ2IA+ Canadian books, archives of the book advice column Ask Your Friendly Neighbourhood Lesbrarian, and some other queer, bookish stuff. She also writes for Autostraddle. Find her on Twitter: @canlesbrarian. Some of her old reviews, especially the non-Canadian variety, can be found at the Lesbrary.
View all posts by CaseytheCanadianLesbrarian →
This entry was posted in Asian, Fiction, Lesbian, Mariko Tamaki, Toronto and tagged Comedy, Humour. Bookmark the permalink.