Posted on January 24, 2017 by CaseytheCanadianLesbrarian 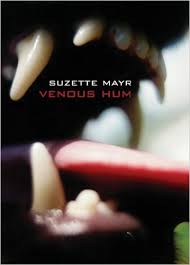 If you’ve been feeling like all the books you’ve read recently are the same-old, same-old, you should definitely read Venous Hum by Suzette Mayr. Along with Sybil Lamb’s I’ve Got a Time Bomb, Venous Hum is probably one of the weirdest books I’ve ever read. If you don’t know me or my reviews well, you should know that of course when I say weird, I mean it in a good way. I’ll do my best to explain why.

I’ve seen a few sources describe Venous Hum as magical realism, which I guess is kind of a good starting place. I haven’t read too many magical realist books in my time, but I did recently read Anne-Marie’s McLemore’s YA When the Moon Was Ours and I think it’s a pretty standard example. The setting is overall what we understand as “reality” with a few magical twists: in When the Moon Was Ours, for example, roses grow out of the wrist of one of the main characters, the pumpkins in the field of a local farming family start turning to glass, and one character falls into a river and emerges a different gender.

Venous Hum for whatever reason doesn’t feel quite like any other magical realism I’ve ever read, although it does have that feeling of “oh I thought we were in the ‘real world’ but then this super bizarre thing happened.” One thing is that Mayr isn’t Latin American, and it’s those cultures that the magical realist tradition comes from. Also, Mayr’s book is more grotesque and paranormal than you probably associate with magical realism and it’s fucking hilarious.

The humour I have to say was my favourite part of the book. I mean, the main character is named Lai Fun: yes, she’s named after a Chinese noodle, and her wife and parents even sometimes call her noodle for a pet name (which is kind of adorable if you think about it). The novel opens with Lai Fun wondering why she keeps having dreams about banal reality:

Lai Fun dreams she’s sent email at work. She dreams about the soy milk in her fridge … Really what is the point of dreaming at all? … Lai Fun doesn’t mean to be ungrateful—she could have recurring nightmares, she could have insomnia, she could have bigger problems like dreaming in a war-zone—it’s just that the dreams confuse her now. Did she remind Jennifer to make that phone call to the fertility clinic or did she just dream it? Did she really borrow Edward the commissionaire’s pencil? Most of the time she’s sure. Most of the time. It’s not that the dreams frighten her. It’s just that dreams about tea bags are so—soggy.

Venous Hum also features some vampires or possibly cannibals?? At first they appear to be fairly standard blood sucking vampires but later on it appears that they also eat whole people, and even have recipes for things like brain fritters and black bean fingers. (There are actually recipes that appear later in the book so if you’re squeamish, beware). The hilarious part is that some of these vampires are practising vegetarians, later breaking their vegetarianism to grotesque hilarity.

If that sounds weird, well, of course it is, but this also isn’t really a plot focused book. You’re not reading to find out what happens, but more to laugh and wonder at what strange thing is gonna happen next.

And then to add to all this, Venous Hum is also about lesbian middle age and middle class life. Lai Fun’s wife is climbing the corporate ladder and thus is never home cause she’s always at work. She even ditches Lai Fun at their last minute wedding to go schmooze someone she’s trying to get on her board of directors. Lai Fun’s dad now works at a gas station after losing his oil boom job. 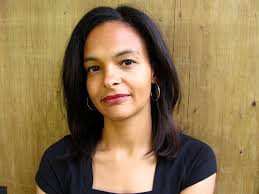 There’s definitely satire going on in this book, especially on racial and sexual identities. Lai Fun and sister are mixed race (one white parent, one Black parent), but you don’t know what Lai Fun’s heritage is until about a third into the book. Given that her name is Lai Fun I thought she was Chinese-Canadian for the first part of the book (and yes, I googled her name and thus confirmed it was a food and not a regular Chinese name but still), and then had to re-orient myself when it became clear she was Black and mixed race. Lai Fun and her sister Angélique are also the children of vampires/cannibals but it’s unclear whether these are inherited traits or not?

There’s also some funny but kind of right-on musing about sexual orientation when Lai Fun is thinking about high school:

She wasn’t gay then. She fell for boys all the time. Smelled boys, looked at their skin, their hair, their fingers, their necks, their hidden genitals. She looked at them and wanted them or tried to want them in her mouth, on top of her. What she would do with them once they were there she wasn’t sure, but it was the thing to want. Boys. Boys. She wasn’t gay then. Although she was always gay—gay from the second she was born—she just got swept up in the other girls’ hysteria.

And finally, there’s a lot of Calgary in this book too. I’m sure there are things that I’ve missed since I’m not very familiar with Calgary (even though I have a bunch of family that lives there, actually!) but I bet a Calgarian would be delighted to read about many specific places in Venous Hum. I especially liked that the griffins from the Centre Street bridge downtown are recurring “characters” who seem to be able to move on their own and just kind of show up in scenes when they feel like it.

All this to say I loved this wacky, unique book and you all should totally read it.

Bonus! Did you enjoy this review or find it useful? Consider supporting me on the Patreon for Casey the Canadian Lesbrarian that I launched two weeks ago! Patreon is a site where creators of all sorts of things can make some money via subscription payments from their readers/etc. It can be as little as a dollar a month! Help me continue to be able to devote time to this site and you can win stuff like queer books and postcards with personalized book recommendations! Click on the link for more details and to sign up. I’m currently up to $42 a month, so close to my ultimate goal of $50!

Known in some internet circles as Casey the Canadian Lesbrarian, Casey Stepaniuk is a writer and librarian who holds an MA in English literature. She lives and works in the unceded territory of the Snuneymuxw First Nation (Nanaimo, BC). Topics and activities dear to her heart include cats, bisexuality, libraries, queer (Canadian) literature, running, and drinking tea. She runs the website Casey the Canadian Lesbrarian, where you can find reviews of LGBTQ2IA+ Canadian books, archives of the book advice column Ask Your Friendly Neighbourhood Lesbrarian, and some other queer, bookish stuff. She also writes for Autostraddle. Find her on Twitter: @canlesbrarian. Some of her old reviews, especially the non-Canadian variety, can be found at the Lesbrary.
View all posts by CaseytheCanadianLesbrarian →
This entry was posted in Alberta, Black, Canadian, Fiction, Lesbian, paranormal, Queer and tagged funny books, magic realism. Bookmark the permalink.