A Poetry Collection on LGBTQI History that Throws Today’s Young Queer People Under the Bus: A Review of ACQUIRED COMMUNITY by Jane Byers

Posted on June 26, 2017 by CaseytheCanadianLesbrarian 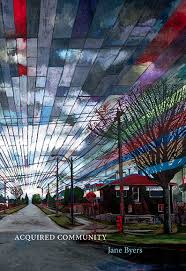 Well, readers, I’m sorry to say it’s time for another review of a book I didn’t like! I pride myself on writing fair but honest reviews, and it’s especially important to me that readers know they can trust my reviews (in so far as it’s only my personal experience and opinion of the book). So here we go with the honesty and fairness. Acquired Community is a poetry collection by Jane Byers, a writer who lives in Nelson, BC. I was excited when I got this book in the mail, because, damn, look at that cover! This is definitely some great book design and cover art by Suzo Hickey. I was also really keen on the topic of queer history: the back cover describes Acquired Community as “a collection of narrative poems about North American lesbian and gay history, mostly post-World War II, and a series of first person poems that act as a touchstone to compare the narrator’s coming out experience within the larger context of the gay liberation movement.” It’s so important to record and be able to hear the stories of queer elders and especially for eras like the AIDS crisis to not be forgotten. It’s something I’m really interested in as a thirty-something queer person.

Unfortunately I don’t think this book delivers what it says it does, and it certainly didn’t present what it did in a way that felt lyrically compelling. What type of poetry you enjoy is certainly a very personal thing, and even though the language in this book didn’t do much of anything for me, it might for you! (In fact, it’s not surprising I didn’t enjoy this book, as one of the endorsements is by Arleen Paré, whose book of poetry I viscerally disliked). My experience with the writing was mostly that it didn’t feel like poetry; you can break prose up into lines, but that doesn’t make it poetry. Where are the powerful images? Where is the play with language? The blurb does specify that these are narrative poems. But what justifies making these narrative poems? What is the effect? Why bother with this form? For me, there wasn’t an effect. There were many poems that I felt would have been stronger writing if they had simply been written as prose stories. For example, in a poem set at a high school health class:

One student asks, “What do lesbians wear to the mall?”

It was the pinnacle of lesbian-fashion-meets-mainstream,

When Birkenstocks were “in.”

I chuckle but dare not say “I wouldn’t know.”

I joke, “Birkenstocks” and they all look down,

some tuck their feet beneath their chair.

Somewhere in here is a funny and interesting story about being asked to speak on being gay to young people and feeling like you have to be an authority. But this poem isn’t really getting at it. It’s a frustrating experience to be reading poetry and feel like you’re reading minimalist prose broken into lines. It’s not giving me what I want from prose or poetry.

So I didn’t jive with the writing, but more troublesome for me were a few of the political implications in the book. I mean, any book declaring it’s about “gay and lesbian” history as if that’s an inclusive term is getting on my nerves before I even open the book. I’m not sure if it’s worse or better that Acquired Community actually features historical bi, trans, and intersex people in the poems but then erases them on the back cover. To be fair, there is also an LGBT on the back cover blurb, but a) “gay and lesbian” does not equal LGBT and using them interchangeably perpetuates the idea that it is and b) nowhere is there any mention of intersex people. For a book about the history of our movements, it’s pretty bad that the promotional material is erasing the historical people who were actually at the forefront of the Stonewall Riots and the first Pride parade (trans women of colour like Marsha P. Johnson, Sylvia Rivera, Miss Major and bisexual activist Brenda Howard). I get that in some contexts, like for SEO or if you’re choosing pre-defined categories like from Library of Congress, you have to compromise and choose language that isn’t ideal. But this is just in the narrative description of the book!

More upsetting for me was some of the content that depicted the only young queer person as an apolitical person who doesn’t know anything about queer history and doesn’t want to. (This is in the long poem “Keen,” which is imagined as a conversation between a young gay university student and Michael Lynch, a Canadian AIDS activist, writer, and scholar). I LOVE the concept for the poem. But damn, the portrayal of the young person really rubbed me the wrong way. It felt ageist, particularly because he’s the only young queer person featured in the collection.

Like, I know a shit ton of queer and trans young(er) people doing amazing political work. What about Morgan M Page’s podcast One from the Vaults, which is about trans history? What about the queer Black founders of Black Lives Matter, Alicia Garza, Patrisse Cullors, and Opal Tometi? Why are these kind of people absent from the book? Of course there are LGBTQ2IA people today who don’t know much about the history of our movements and who aren’t actively involved in activism. But this isn’t all of us. If you don’t know about young people engaging in amazing queer activism today, do some research! Writing about past queer activism and implying that today’s LGBTQ2IA people don’t know their queer history and don’t care about activism is insulting, especially the Black Lives Matter activists who are working in the name of folks like Sylvia Rivera and Marsha P Johnson to work against racism and transphobia in our communities and to bring back Pride parades to their roots as protests as well as celebrations. Wouldn’t it have been great if the conversation in “Keen” had been between Michael Lynch and one of today’s activists? What a missed opportunity.

Well that’s it for a fair and honest review! If anyone else has read this book, I’d love to hear your thoughts.

Bonus! Did you enjoy this post or find it useful? Consider supporting me on the Patreon for Casey the Canadian Lesbrarian! Patreon is a site where creators of all sorts of things can make some money via subscription payments from their readers/etc. It can be as little as a dollar a month! Help me continue to be able to devote time to this site and you can win stuff like queer books and postcards with personalized book recommendations! Click on the link for more details and to sign up.

Known in some internet circles as Casey the Canadian Lesbrarian, Casey Stepaniuk is a writer and librarian who holds an MA in English literature. She lives and works in the unceded territory of the Musqueam, Squamish and Tsleil-Waututh First Nations (Vancouver, BC). Topics and activities dear to her heart include cats, bisexuality, libraries, queer (Canadian) literature, running, and drinking tea. She runs the website Casey the Canadian Lesbrarian, where you can find reviews of LGBTQ2IA+ Canadian books, archives of the book advice column Ask Your Friendly Neighbourhood Lesbrarian, and some other queer, bookish stuff. She also writes for Autostraddle, Book Riot and Inside Vancouver. Find her on Twitter: @canlesbrarian. Some of her old reviews, especially the non-Canadian variety, can be found at the Lesbrary.
View all posts by CaseytheCanadianLesbrarian →
This entry was posted in Canadian, Poetry, Queer. Bookmark the permalink.

1 Response to A Poetry Collection on LGBTQI History that Throws Today’s Young Queer People Under the Bus: A Review of ACQUIRED COMMUNITY by Jane Byers