Interview with a Queer Reader: Anna Marie Talks Life-Changing Queer Books Like ORANGES ARE NOT THE ONLY FRUIT and Being Forced to Read Books by White Cis Straight Men

Posted on August 10, 2017 by CaseytheCanadianLesbrarian

August’s queer reader of the month is Anna Marie! They describe themselves as a “mess of confusion always,” as well as a “red sick witch, a crip, a queer, a person who is very obsessed with nouns because they lack emotional/mental stability.” Anna’s not sure about their identity, but knows they have a lot of Sapphic queer feelings, that their favourite food is chocolate, and that they love making art. Anna’s also a survivor of sexual violence and a Capricorn in both their moon and sun signs. Connect with Anna on Twitter and on Instagram at @girlhowl.

Keep reading to find out about Anna’s life-changing books, including Oranges Are Not the Only Fruit, The Color Purple, and She of the Mountains, as well as their idea for a queer femme Rapunzel re-telling and being forced to read books by cis white straight dudes when you’re doing a literature degree.

What was the first LGBTQ2IA+ book(s) you remember reading? How did you end up reading it (i.e., were you searching for queer books or did you just happen across it?)

I think the first book I remember reading that counts as a proper queer book (i.e the queer character is the main character rather than a side one) was Oranges Are Not the Only Fruit by Jeanette Winterson which my parents had a copy of! Both my mum and my dad loved books so I was encouraged to read – but I don’t think my dad quite realised what he had done when he introduced me to it! The book opened my eyes to these new possibilities of being: I just remember reading it with such ferocity and intensity. It has changed my life truly. I am so glad it exists; its a book so full of passion and resilience!!

Okay so obviously we’ve been over Oranges, so I guess I would say The Color Purple by Alice Walker which is just an amazing, heart-bleeding book (massive content warning for sexual and physical violence though). This was another book that I read with an intense focus and an intense connection – I think I also didn’t quite realise how and why I connected with Celie whilst I read it until later on (although I could never entirely connect with Celie’s experience because I’m a white person) – so it’s a book that has unfurled more once I finished it.

Then last summer I read Trumpet by Jackie Kay which I just thought was absolutely incredible. It’s beautifully written, so poetic and vivid! It follows the story of a trans guy jazz musician who has just died and the fact he was trans gets out to the media. So the story has multiple points of view, from family members to this horrible journalist who wants to write an exploitative book about him. There is some transphobia in the book via the perspectives and parts made me uncomfortable in a very real way. There’s lots of misgendering and slurs in this book but I felt like Kay wasn’t agreeing with these viewpoints and the ending allows power and a voice to the right people! (Trying not to give away spoilers!)

I read She of The Mountains and it also probably changed my life! I love Vivek Shraya and it was wonderful and refreshing to read a book about bisexuality and biphobia (from both the queer community and straight people in general). The book is about identity, self love, relationships and it’s all told in parallel to a reimagining of Hindu mythology. The book also has really cool illustrations and a very experimental use of language. It helped me to start to untangle by own bi/sexuality/romanticism and the biphobia and shame I felt coming at me from all around.

Lastly I think I would pick Zami: A New Spelling of My Name by Audre Lorde. First of all Audre is such an amazing writer, activist, person, poet. Secondly I just really enjoyed this biomythography of her life! Its so tender and bittersweet and it recounts her childhood memories up until I think when she is around 22. It’s a really touching, sensual, poetic and nostalgic book which just can’t help but fill me up with softness and queer feelings.

Also I wanted to write a bonus shout out to Power & Magic: The Queer Witch Comic Anthology!! It’s so full of queer witch goodness!! 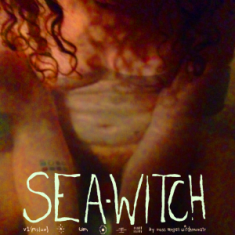 This is definitely something that fluctuates a lot to be honest! Because my identity and what is important to me shifts there isn’t really one book that bests reflects me! Especially cos my soul is so traumatised!  But I think a mix of She of the Mountains with one of the comics in Power & Magic called “Your Heart is an Apple” by Nivedita Sekar and with a bit of Sea-Witch Volume 1 by Moss Angel Witchmonstr mixed in.

A book about a sometimes sex-repulsed survivor of sexual violence who is queer and femme and has long hair and finds a beautiful girl who understands and they live together in a Rapunzel-like tower with a dragon who looks after them and it’s lovely, also they practice witchcraft and they grow their own food on the roof of the tower! When the dirt falls down villagers collect it because they know it is full of lovely Sapphic Power and it will nourish them and their lives too. (I think I should write this now I’ve written it out here!!)

And, a book about an aro ace dragon void girl. Where are you??? I need you!!!

Booktube! Twitter!! Blogs like yours and Fuck Yeah Lesbian and Bi Literature! Goodreads!! Plus I’m always searching and on the hunt. If I had the choice I would only read queer and trans books but I do a literature degree that is full of boring old straight white men and I am forced to read their outdated, offensive, and overrated books. I think also for me, it’s quite easy to find queer books in general because I only have queer friends at this point and if one of us reads a book we love we will share it out to everyone!

Do you know other LGBTQ2IA+ readers or participate in any LGBTQ2IA+ reading communities (in person or on the Internet)? What’s it like? Why or why not?

As I said I mostly have queer friends some of whom also do boring literature degrees and love to talk about all the books we want to read that aren’t by, about, and for white straight cis men. I feel like the communities on Booktube and Goodreads and Twitter that I have found (like We Need Diverse Books and the Lesbrary) are really helpful and make participating really fun! I think it can be a little stressful that people might judge you or your identity on the books you consume but otherwise I really enjoy it!

Thanks so much for sharing with us Anna! It’s so great to hear about how life-changing queer books can be for queer people. It reinvigorates me to get out there as a librarian and match great queer books with the readers who need them!

Known in some internet circles as Casey the Canadian Lesbrarian, Casey Stepaniuk is a writer and librarian who holds an MA in English literature. She lives and works in the unceded territory of the Musqueam, Squamish and Tsleil-Waututh First Nations (Vancouver, BC). Topics and activities dear to her heart include cats, bisexuality, libraries, queer (Canadian) literature, running, and drinking tea. She runs the website Casey the Canadian Lesbrarian, where you can find reviews of LGBTQ2IA+ Canadian books, archives of the book advice column Ask Your Friendly Neighbourhood Lesbrarian, and some other queer, bookish stuff. She also writes for Autostraddle, Book Riot and Inside Vancouver. Find her on Twitter: @canlesbrarian. Some of her old reviews, especially the non-Canadian variety, can be found at the Lesbrary.
View all posts by CaseytheCanadianLesbrarian →
This entry was posted in Bisexual, Interview with a Queer Reader, Trans, Transgender. Bookmark the permalink.

2 Responses to Interview with a Queer Reader: Anna Marie Talks Life-Changing Queer Books Like ORANGES ARE NOT THE ONLY FRUIT and Being Forced to Read Books by White Cis Straight Men