A Tiny Gem of a Book: A Review of Graphic Novel STEAM CLEAN by Laura Ķeniņš

Posted on September 26, 2017 by CaseytheCanadianLesbrarian

Steam Clean by Toronto-based comic artist and writer Laura Ķeniņš is one of those tiny little gems of a book that takes you by complete surprise. The unadorned, colourful illustrations are deceptively simple. And for a small graphic novel that’s easy to read in an hour or two, it has surprising depth and punch.

Steam Clean takes place over a single night at a queer women’s sauna party somewhere in Northern Europe on a cold autumn night. If you’re the kind of comics reader who wants lots of “action,” you might be disappointed with this book, because it’s the kind of story where the conversation is the action. It reminded me viscerally of communities of queer women that I’ve been a part of, the good parts and the bad. It also made me think of Dykes to Watch Out For, another (more famous) comic centred on a group of queer friends, in that it feels like a glimpse into an intimate group of queer women friends written with a queer audience in mind. 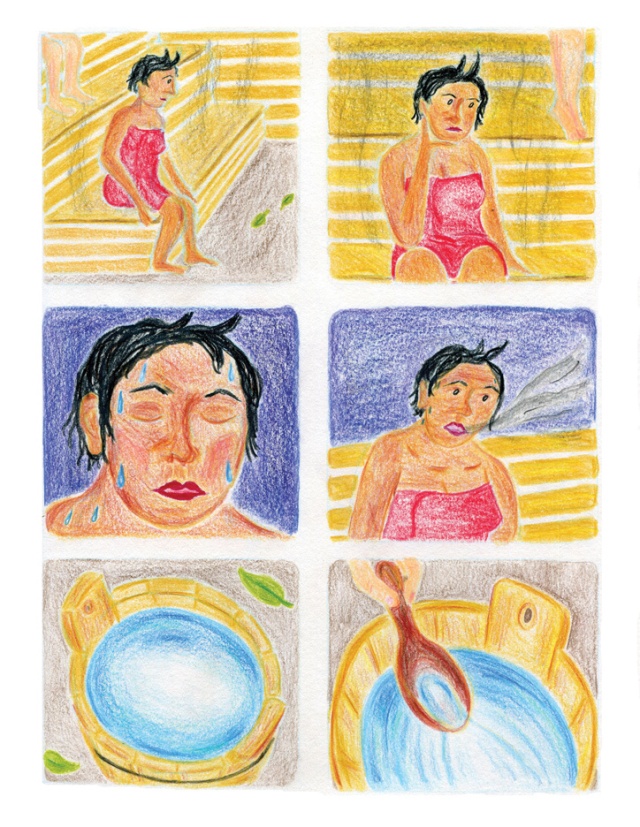 The people attending this queer women’s sauna all have distinct personalities—an impressive feat in such a short span of space. One of the attendees is there reluctantly because their ex dragged them there even though they don’t identify as a woman anymore. Other characters include a woman navigating the nasty world of queer online dating while being trans, an opinionated woman who bullies her friend about how she views her past sexual relationships with men, a bisexual goddess—yeah, literally a mythological goddess—who needs some motivation to come out of in the closet, and a woman dealing with systemic sexism in the workplace.

In the quiet story of Steam Clean, these people get sweaty in the sauna, verbally airing their tensions as the heat works the tension out of their muscles. Sometimes they get up to cool off—literally and figuratively—outside or in a cold pool. The seeds of a small, budding romance appear. Friendships are tested. New ideas take root in some people’s minds. And then at the end of the night, everybody goes home. Nothing is solved, nothing dramatic happens, the world is much the same as it was before. It’s like the literary equivalent of actually going to hang out with some friends for a sauna. In other words: Steam Clean is a lovely slice of life comic. I’m excited to read whatever Laura Ķeniņš does next!

Known in some internet circles as Casey the Canadian Lesbrarian, Casey Stepaniuk is a writer and librarian who holds an MA in English literature. She lives and works in the unceded territory of the Snuneymuxw First Nation (Nanaimo, BC). Topics and activities dear to her heart include cats, bisexuality, libraries, queer (Canadian) literature, running, and drinking tea. She runs the website Casey the Canadian Lesbrarian, where you can find reviews of LGBTQ2IA+ Canadian books, archives of the book advice column Ask Your Friendly Neighbourhood Lesbrarian, and some other queer, bookish stuff. She also writes for Autostraddle. Find her on Twitter: @canlesbrarian. Some of her old reviews, especially the non-Canadian variety, can be found at the Lesbrary.
View all posts by CaseytheCanadianLesbrarian →
This entry was posted in Bisexual, Canadian, comics, Fiction, Graphic, Lesbian, Non-Canadian, Queer, Trans, Trans Feminine, Transgender. Bookmark the permalink.

3 Responses to A Tiny Gem of a Book: A Review of Graphic Novel STEAM CLEAN by Laura Ķeniņš