Queer Can Lit Newsflash: Lots of Queer and Trans Writers Will Be at Growing Room in Vancouver, Plus Exciting New Work to Read and Put On Your TBR

Posted on March 1, 2018 by CaseytheCanadianLesbrarian

Here are some rad things that have happened or will be happening in the queer Can Lit world recently:

Did you know queer Vancouver based poet Leah Horlick has a new poem called “Wing (I Take It Back)” published online in the new issue Skin Haunt from Hematopoiesis Press? It starts: “Looking back it’s better that you stayed / home. You would have crushed / her.” You can read the full poem here. 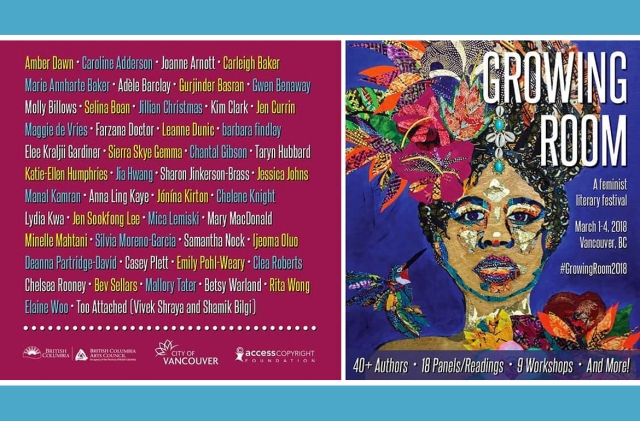 Growing Room, a feminist literary festival put on by Room Magazine, is happening this weekend, March 1-4, on traditional, unceded, and ancestral territory of the Musqueam, Tsleil-Waututh, and Squamish peoples, aka Vancouver. There are a bunch of awesome writers who are going to be there, including, of course, some queer and trans authors. There were even a few names who were new to me! They include Amber Dawn, Adèle Barclay, Gwen Benaway, Molly Billow, Jillian Christmas, Farzana Doctor, barbara findlay, Lydia Kwa, Casey Plett, Vivek Shraya, Betsy Warland, and Rita Wong! Forgive me if I’ve missed someone–I’m only one lesbrarian! No matter what kind of event you’re into—writing workshops, music performances, or panels and readings—there should be something for you at Growing Room!

Some of my absolutely favourite writers are going to be at Growing Room, and I think sadly I will not be able to go because of my nuts work schedule. Please go for me and have the best time!

You’ll definitely be wanting to add this upcoming book to your to-read list: it’s called Me, Myself, They: The Future is Non-Binary and it’s by Joshua M. Ferguson, a non-binary trans filmmaker, writer, and activist. It will be published by House of Anansi Press in spring 2019. Anansi has this to say about the book:

Me, Myself, They: The Future Is Non-Binary examines what it means to live with a non-binary identity in today’s world. Through their exploration of the discourse around gender, sex, and sexuality, Joshua M. Ferguson challenges common notions of these terms and discusses their public and private life and what it is to live as neither man nor woman.

“I found me in my resilience. I found myself in my storytelling. And I found they in stories of brave people,” says Ferguson. “Me, Myself, They elevates our shared humanity by creating connections with our similarities to see beyond either/or differences. An opening exists for my non-binary memoir thanks to people across generations and cultures who have written, voiced, and fought for their truth.”

“We are thrilled to be publishing Joshua M. Ferguson’s Me, Myself, They,” says editor Douglas Richmond, who acquired the project for Anansi. “This book will educate and challenge readers, encouraging them to open their minds to the diversity of gender and sexuality, while at the same time offering the warmth of Joshua’s brilliant and unique insights into the non-binary trans experience.”

Combining private and personal stories alongside an analysis of emerging trends in popular culture that signal a massive shift in our understanding of gender and sex, Me, Myself, They promises to counter non-binary trans exclusion, erasure, and invisibility.

Joshua Whitehead’s debut book of poetry called full-metal indigiqueer came out in 2017, but it was just reviewed by Gwen Benaway on Plenitude Magazine this month. Benaway calls it “cyberpunk dystopian vision of modern queer Indigenous life.” This is obviously a must-read, and I’m glad Benaway’s review brought it to my attention again!

The Malahat Review has put out a call for submissions (due July 15 2018) for their upcoming queer perspectives issues. Here’s the info:

The Malahat Review invites writers identifying as LGBTQ2S? to submit their work for consideration for an issue celebrating contemporary queer writing in Canada.

To be published in January 2019, “Queer Perspectives” will celebrate the aesthetics, concerns, contributions, and achievements of queer writers living in Canada, recognizing their crucial role in providing a truly complete picture of what it is like to be alive in this country in the past, future, and especially today. Submissions are welcome from all LGBTQ2S? writers. All aspects of diversity and inclusivity welcomed and encouraged.

Guest editors Ali Blythe, Trevor Corkum, and Betsy Warland are interested in considering submissions of exciting contemporary LGBTQ2S? writing by poets, short-story, and creative-nonfiction authors whose work makes vivid and particular their experience of being alive in the world.

“Queer Perspectives” emphasizes inclusivity, diversity, and trust. Rather than the guest editor each reading and selecting for a single genre in isolation, they will work collaboratively, bringing to bear their expertise and insights into queer writing on all submissions irrespective of genre.

Known in some internet circles as Casey the Canadian Lesbrarian, Casey Stepaniuk is a writer and librarian who holds an MA in English literature. She lives and works in the unceded territory of the Musqueam, Squamish and Tsleil-Waututh First Nations (Vancouver, BC). Topics and activities dear to her heart include cats, bisexuality, libraries, queer (Canadian) literature, running, and drinking tea. She runs the website Casey the Canadian Lesbrarian, where you can find reviews of LGBTQ2IA+ Canadian books, archives of the book advice column Ask Your Friendly Neighbourhood Lesbrarian, and some other queer, bookish stuff. She also writes for Autostraddle, Book Riot and Inside Vancouver. Find her on Twitter: @canlesbrarian. Some of her old reviews, especially the non-Canadian variety, can be found at the Lesbrary.
View all posts by CaseytheCanadianLesbrarian →
This entry was posted in Amber Dawn, Canadian, Indigenous, News, Non Binary, Poetry, Postcolonial, Queer, Queer Can Lit Newsflash, Trans, Trans Feminine, Transgender, Vancouver. Bookmark the permalink.

1 Response to Queer Can Lit Newsflash: Lots of Queer and Trans Writers Will Be at Growing Room in Vancouver, Plus Exciting New Work to Read and Put On Your TBR