Family, Whales, and Trans Kids in Middle Grade Novel A POSSIBILITY OF WHALES by Karen Rivers

Posted on March 15, 2018 by CaseytheCanadianLesbrarian

A Possibility of Whales by Victoria-based author Karen Rivers is, to my knowledge, the first Canadian middle grade book to feature a transgender character. This makes it a pretty big deal. Overall, I’m happy this book exists for cisgender and transgender kids; although the author isn’t trans, A Possibility of Whales avoids the major pitfalls in other novels with trans characters written by cis authors and it’s a pretty delightful story about family and connection.

While Harry is the young trans boy character that made this book a draw for me, it’s Natalia who is the main character. She’s a unique, quirky 12-year-old girl with an unusual life: her single dad is a super famous actor whose bananas paparazzi following forces them to move nearly every year. Her dad—whose name is always spelled out in capital letters XAN GALLAGHER—is a larger than life force, with a big, extroverted personality that overshadows Nat’s more thoughtful, quiet one. Nat’s mom left when she was really young and her dad refuses to talk about her; Nat doesn’t even know who her mom is, although she suspects she’s another famous person despite her secret dream that mom is a French makeup artist. The dynamic between Nat and her dad is excellently done; it feels messy, and authentic, and very much a mix of good for Nat and not so good. It reminded me of See You at Harry’s by Jo Knowles—another LGBTQ middle grade book—which also features a very real family full of love but far from perfect. Both books are very much about family.

When the novel begins, Nat and her dad’s most recent move is to Canada’s west coast. It’s there that she meets Harry (in the bathroom on the first day of school of all places). Nat is instantly drawn to Harry, and considers him her top pick for her new best friend. Finding a new best friend is something she is used to doing every year. Harry, however much he also likes Nat and wants to be friends, is torn because he really wants to establish to the whole outside world that he’s a regular boy and being BFFs with a girl doesn’t exactly fit in that plan. Rivers does a really good job depicting how tricky it is for Harry to establish his masculinity without falling into anti-femininity.

I was really pleased to see that the narrative refers to Harry as a boy and uses the name Harry and he/him pronouns from the very beginning. Rivers immediately establishes his boyness and doesn’t situate his character as seeming to be one thing and then being another. At no point is he ever anything but a boy to Nat. This is NOT a coming out narrative nor is it a story about Harry being trans. Nowhere in the novel or in the promotional material does it use the wrong pronouns or use language like “born a girl” or “used to be a girl.” We do hear Harry’s given name a few times, but the book clearly situates the adults doing that as disrespectful. We know that Harry is very firm in who he is and is also informed about trans issues from looking them up on the internet

Rivers makes an interesting choice to open up the narrative’s perspectives from Nat’s only to include some sections from Harry’s point of view. (See my Q&A with Karen Rivers coming up tomorrow for more thoughts on that decision!) We get to see a little more of what’s going on for Harry and the ways that he is coping with the shitty situation of having one decidedly unsupportive parent and another one not quite brave enough to do the right thing, at least at first. I do still wish Rivers had developed Harry a bit more, but Nat is the protagonist after all. I also wonder what kind of book this would have been if Rivers had made the choice to make Harry’s parents supportive and therefore to not have to focus on his being trans as much. Harry’s lack of parental support is an unfortunate reality for some trans kids though, and I don’t think A Possibility of Whales falls into the trap of seeing him only as a victim or pitying him.

This is definitely a character-driven novel, with not a lot of action for the first two thirds of the book. Things pick up a lot near the end when Nat, her dad, and Harry’s parents go on a trip to Mexico together and the stakes get higher. There’s a gap in time in the middle which the book skips over that, in my reading, made the relationship between Harry and Nat suffer because it didn’t feel like there had been enough time to establish it. There are some wonderfully poignant moments at the end that feel a bit squished into too few pages to really have the full impact they should. If only the pacing had been adjusted in the editing process!

Criticisms aside, I would definitely recommend this book as a great addition to any middle grade collection at a public or school library or the shelves in your very own home. Oh, and did I mention there are really cool whales?

Stay tuned tomorrow for my official blog tour post on A Possibility of Whales; it’s a Q&A with the author! There will also be a Canada-only giveaway! 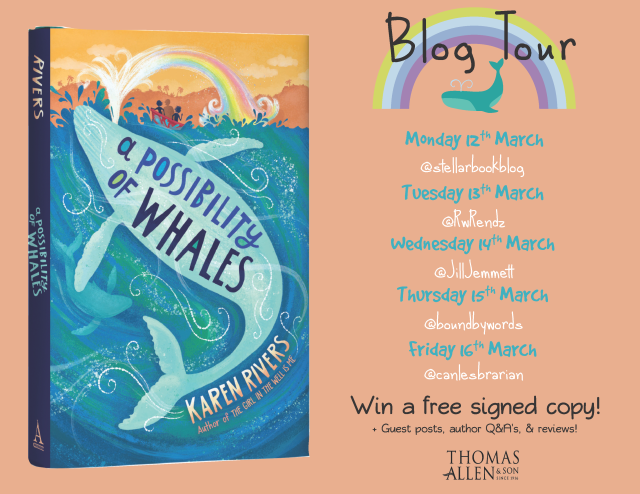 Known in some internet circles as Casey the Canadian Lesbrarian, Casey Stepaniuk is a writer and librarian who holds an MA in English literature. She lives and works in the unceded territory of the Musqueam, Squamish and Tsleil-Waututh First Nations (Vancouver, BC). Topics and activities dear to her heart include cats, bisexuality, libraries, queer (Canadian) literature, running, and drinking tea. She runs the website Casey the Canadian Lesbrarian, where you can find reviews of LGBTQ2IA+ Canadian books, archives of the book advice column Ask Your Friendly Neighbourhood Lesbrarian, and some other queer, bookish stuff. She also writes for Autostraddle, Book Riot and Inside Vancouver. Find her on Twitter: @canlesbrarian. Some of her old reviews, especially the non-Canadian variety, can be found at the Lesbrary.
View all posts by CaseytheCanadianLesbrarian →
This entry was posted in Canadian, Fiction, Queer, Trans, Trans Masculine, Transgender, Victoria and tagged lgbtq middle grade. Bookmark the permalink.

1 Response to Family, Whales, and Trans Kids in Middle Grade Novel A POSSIBILITY OF WHALES by Karen Rivers