Posted on April 26, 2018 by CaseytheCanadianLesbrarian

April’s queer reader is Sophia, a 21-year-old English Literature undergraduate with “a bit of a major love for YA fiction – contentious in [their] degree programme, frustratingly.” They are looking forward to writing their dissertation about Harry Potter both to annoy and impress the naysayers. Sophia identifies as a genderqueer woman—“meaning I am a woman but also not.” Sophia is also bi and greyace/demisexual. They’re very passionate about ace representation as they’d never heard the term ‘asexual’ until they were 18 even though they considered themselves pretty in the know about queerness. Another important thing to know about Sophia is mental health, which has been central to their life as long as they can remember. Sophia writes a lot about mental heath and also has a podcast centred on mental health called the Hurricane Pod. That podcast’s name is a metaphor for Sophia’s mind: as they put it: “the messy, powerful, potentially destructive, weirdly wonderful thing that is my mind!” You can find Sophia on Twitter, or over on their blog. Sophia also writes for an organisation called Powered By Girl, where you can find a lot of bookish writing. 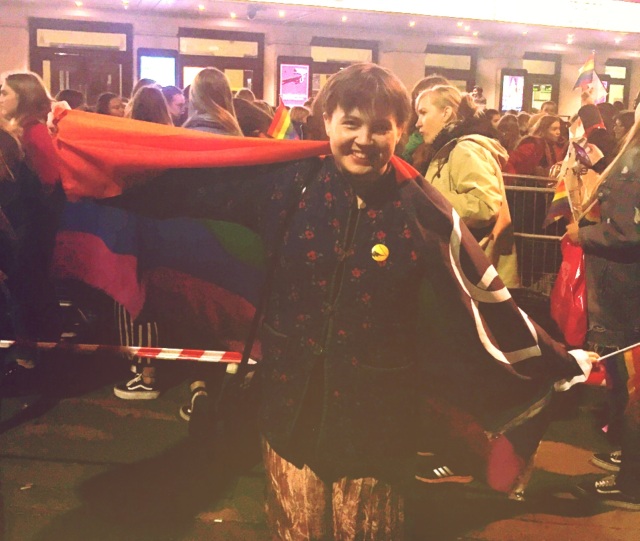 Keep reading to hear Sophia talk about Jeanette Winterson, loving YA even though you’re an adult now, looking for ace girl protagonists, shopping at Gay’s the Word bookshop in London, and more!

What was the first LGBTQ2IA+ book(s) you remember reading? How did you end up reading it?

The first I recall reading was Will Grayson, Will Grayson by John Green and David Levithan. I was 15 and a huge John Green fan, so I absolutely had to read everything with his name on it. I don’t remember feeling much then though. When I was 16, I started actively seeking out women-loving-women content – that was when I started to get excited by queer representation. The first one that made me go ‘ugh, YES!’ was Jeanette Winterson’s memoir Why Be Happy When You Could Be Normal? I actually picked it up because of the title! I devoured everything she’s ever written pretty swiftly after that.

YA is what I find most comforting, and although I am *technically* an adult now it is what I tend to identify more with! My favourite YA authors are Nina LaCour and David Levithan, so of course the book that they co-wrote – You Know Me Well – was an immediate winner. I love how each of them write, and the characters felt very real to me. I have read it over and over and over – and it only came out mid-2016! Also, there’s a poem read out by a genderqueer character which made me cry the first time I read it…okay, it makes me cry every time.

Honestly, I still feel as though I have yet to find true representation – ace characters are still few and far between. But I think Mira, the main character in Kate Scelsa’s Fans of the Impossible Life is the closest I’ve ever felt to SEEN. She’s bi, depressed, anxious, living and struggling and loving and messing up and having fun and feeling pain. She also has actual queer friends, unlike the typical ‘one queer amongst the cishets’. I appreciate that.

More than anything, I want an ace girl as a protagonist. I don’t want her to have all the basic, stereotypical characteristics of ace folk – we’re not a monolith! I want her to navigate love and learn how to be okay in herself. I want her to live her live and have it be messy but ultimately have a nice ending. She deserves a nice ending.

I’m lucky that – although I don’t live there – I’m in London quite frequently, and I nearly always pop into the shop Gay’s the Word! I spend hours sitting on the floor in the corner, reading bits of new things to see if I’m into it. I like talking to their staff too, they’re always lovely and helpful!

Do you know other LGBTQ2IA+ readers or participate in any LGBTQ2IA+ reading communities (in person or on the Internet)? What’s it like?

Two of my closest friends – who I know through writing for Powered By Girl – are also huge fans of YA, and are also queer. We share recommendations, and it’s good because they know what I like and vice versa. We’re also aware of each other’s triggers, so we can trust that we will be told if there is something we might struggle with, and that otherwise it is going to be mostly safe! It’s also just really nice to cry over cute girls in love together.

Thanks for sharing with us Sophia! Fans of the Impossible Life is a favourite of mine too. Anyone have recommendations for books with ace girl main characters for Sophia?

Known in some internet circles as Casey the Canadian Lesbrarian, Casey Stepaniuk is a writer and librarian who holds an MA in English literature. She lives and works in the unceded territory of the Snuneymuxw First Nation (Nanaimo, BC). Topics and activities dear to her heart include cats, bisexuality, libraries, queer (Canadian) literature, running, and drinking tea. She runs the website Casey the Canadian Lesbrarian, where you can find reviews of LGBTQ2IA+ Canadian books, archives of the book advice column Ask Your Friendly Neighbourhood Lesbrarian, and some other queer, bookish stuff. She also writes for Autostraddle. Find her on Twitter: @canlesbrarian. Some of her old reviews, especially the non-Canadian variety, can be found at the Lesbrary.
View all posts by CaseytheCanadianLesbrarian →
This entry was posted in asexual, Bisexual, Fiction, Interview with a Queer Reader, Queer, Young Adult. Bookmark the permalink.