“I believe in dangerous stories”: A Review of FIERCE FEMMES AND NOTORIOUS LIARS by Kai Cheng Thom

Posted on July 13, 2018 by CaseytheCanadianLesbrarian

There aren’t many books in my lifetime that I’ve read that I would truly consider a work of genius, the kind of book that feels timeless and like it should be read and discussed far into the future and that is really doing something unique and ground-breaking. But debut novel Fierce Femmes and Notorious Liars by Kai Cheng Thom is one of those books. (By the way, I also loved Kai Cheng Thom’s debut poetry collection, A Place Called No Homeland, so you can count me among her top fans now, eagerly awaiting whatever she does next).

Fierce Femmes is a funny, dark, innovative story that completely takes apart the genre of the trans memoir. The subtitle, A Dangerous Trans Girl’s Confabulous Memoir, is only the first clue that you are about to read a mind-blowing breakdown of genre and gender.

I can’t introduce the book any better than it introduces itself:

I don’t believe in safe spaces. They don’t exist. I do, however, believe in dangerous stories: the kind that swirl up from inside you when you least expect it, like the voice of a mad angel whispering of the revolution you are about to unleash. Stories that bend and twist the air as they crackle off your tongue, making you shimmer with glamour, so that everyone around you hangs on your every intoxicating word… The kind of story that doesn’t wait for you to invite it to enter, but bursts through the doors of your rat-infested house like a glittering wind, hungry, hungry, to snatch up the carpet and scatter your papers and smash every single plate in the kitchen…Where are those kinds of stories about trans girls like you and me?

A few things are clear on this first page (which, honestly, I wanted to copy in full, but that just seemed excessive): 1) Kai Cheng Thom’s writing is the kind of beautiful that grabs you by the throat; 2) She’s writing explicitly to trans femmes; 3) It’s completely, wonderfully unclear how the book you’ve just picked up might fit into conventional book genres.

After this perplexing and gorgeous introduction, the voice of this young Chinese Canadian trans woman brings you right into the story, although perhaps not without your doubts about her reliability in a traditional sense. In a description that seems a thinly veiled picture of Vancouver, she tells us “I grew up in a crooked house in a placed called Gloom, where the sky is always grey and the rain is always falling. Gloom was built on the edge of the sea, on land that was once inhabited solely by several Indigenous nations.” She doesn’t stay there long, however; the name of part one, indeed, is “Runaway.” She heads east. She heads to “the City of Smoke and Lights.” 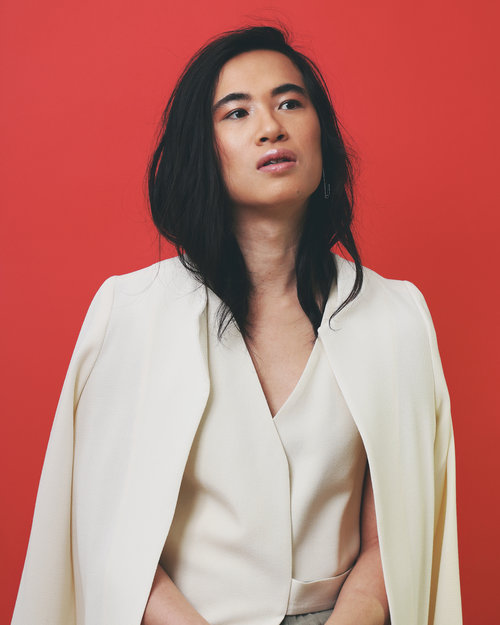 But it’s not too far into her story that she suddenly breaks the narrative abruptly, and says “Wait. Sorry. That’s not what happened. Here is what happened:”

This is the first time of many where Thom playfully dangles that idea of truth in front of the reader. Not only does the protagonist contradict herself in the main narration, we also see different perspectives in the letters to her sister and the poems she writes for herself that are included. What kind of ‘trans memoir’ is this? It’s not the one that going to satisfy anyone looking for ‘what really happened,’ nor is it going to satisfy cisgender readers looking for a simplified, exploitative tell-all about the sensationalized details of transgender life. You are, however, going to love this if you want a book to complicate the ideas of truth and selfhood:

Sometimes, to become somebody else, you have to become nobody first. You have to let go of your mother and father, the crooked starving house you grew up in that wanted to devour you and digest you whole. Forget, if you can, all the promises you’ve made and the lies that you’ve told. Forget the scars you left one, two, three times on your left wrist. Forget flowers and killer bees and everyone you’ve ever known…I’m going to find the place where my shadow ends and my body begins. Close your eyes. I’ll see you there.

She arrives at the Street of Miracles, she falls in fast with a group of trans sex workers. Mentors Kimaya and Rapunzelle—a great and complicated power lesbian couple—in particular help her find her first little crappy apartment:

Little cocoon apartment, I love how you rattle and shake in the wind. You are mine like nothing has ever been before. Someday you’ll tear open, and I will fly out with the wings I have grown inside you. Still shimmering. Still wet.

In this new external environment, our confabulous trans girl has time to confront some of her internal demons, most of all: “why I hurt people when what I really want is for them to love me.” She also becomes involved with their girl gang the Lipstick Lacerators, which rises up to strike back against the violent transmisogynist men.

At first, this girl gang is nothing but success. And I can’t deny that there is something so deeply cathartic and just plain fun in part three of the novel, “girl gang.” It’s so satisfying to read about / watch women beating up shitty dudes. It was a bit like watching a particularly great episode of Buffy. But, of course, this fever dream of ass-kicking and empowerment can’t last. And it’s then that our protagonist realizes things can’t go on like this. But neither can she go on another path of privilege, which is briefly offered her by a rich trans guy who wants to date her. (What ultimately convinces her that she can’t live in his fancy apartment that his parents pay for is that the toilet paper is so soft and luxurious. It finally hits her: “I don’t belong here.”)

The novel has a fascinating blend of magic and gritty realism; I guess that makes it magical realism, but this is a magic whose ways are both unpredictable and powerful and a realism that doesn’t shy away from the hard realities of transmisogyny, racism, and anti-sex worker violence. It’s the kind of magic that might make the corrupt police officer chasing them disappear, but not the lingering trauma that rears its head in the form of anxiety and paranoia. At one point, our protagonist has this conversation with a magical healer:

“You will be able to stop hurting people when you can stop hurting yourself.”
“But how do I do that?”
“If I knew that magic, I wouldn’t be here anymore.”

Magic helps, but it doesn’t solve everything, especially the really big stuff. For that, she must escape again; that is where the book ends.

In the way it deals with magic, as well as others, Fierce Femmes reminds me a lot of Amber Dawn’s Sub Rosa but it’s also very much its own thing, particularly as an ode to trans sisterhood and an interrogation of the trans memoir. If you like Amber Dawn’s writing, as well as other fiercely strange and wonderful writers like Sybil Lamb and Megan Milks, definitely pick up this book. It’s also simply one of the most beautifully written books I have ever read. Here’s to many Fierce Femmes readers today and far in the future, as this brilliant novel takes its place among other books of sparkling genius.

Known in some internet circles as Casey the Canadian Lesbrarian, Casey Stepaniuk is a writer and librarian who holds an MA in English literature. She lives and works in the unceded territory of the Musqueam, Squamish and Tsleil-Waututh First Nations (Vancouver, BC). Topics and activities dear to her heart include cats, bisexuality, libraries, queer (Canadian) literature, running, and drinking tea. She runs the website Casey the Canadian Lesbrarian, where you can find reviews of LGBTQ2IA+ Canadian books, archives of the book advice column Ask Your Friendly Neighbourhood Lesbrarian, and some other queer, bookish stuff. She also writes for Autostraddle, Book Riot and Inside Vancouver. Find her on Twitter: @canlesbrarian. Some of her old reviews, especially the non-Canadian variety, can be found at the Lesbrary.
View all posts by CaseytheCanadianLesbrarian →
This entry was posted in Asian, Canadian, Coming-of-age, Fiction, magic realism, memoir, Queer, Sex Work, Trans, Trans Feminine, Transgender, Vancouver. Bookmark the permalink.

13 Responses to “I believe in dangerous stories”: A Review of FIERCE FEMMES AND NOTORIOUS LIARS by Kai Cheng Thom